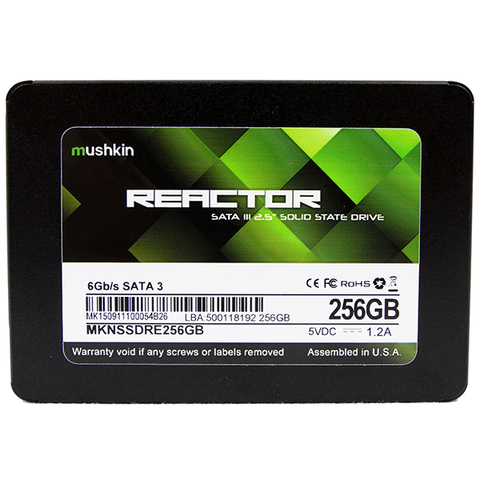 In this section, we see how the previous tests present in real-world workloads. Much like in the other tests, the Mushkin Reactor 256GB falls in the middle to the bottom of each application test chart.

Looking at the same tests, but combined and as throughput, the Reactor doesn't fair as well. We're surprised to see it delivering lower application performance than the SP550, a drive using TLC NAND flash. None of the tests involve installing large games, an area in which the Reactor would separate itself from the TLC models.

There is also a large gap between the Reactor and the Plextor M6V 256GB with the same controller. Toshiba NAND flash has long outshone Micron flash, and that has carried over to the smallest lithography nodes from each company.

The advanced set of tests use the same software loads as in the previous section and output the results in throughput. The test starts by preconditioning the drive to achieve steady state. Then the application workload starts and runs without interruption until the recovery phase. Going into the recovery phase, the drive being tested gets 5 minutes of idle time to perform background flash-management activities, like garbage collection.

The recovery phase is what we're looking at for this price range of products, and it represents the level of performance you will see after an extended period of use. Again, the Reactor stays in the middle of the chart. The ADATA SP550 with the new Silicon Motion SM2256 controller designed for TLC flash performs in the same space as the Samsung 850 EVO.

Things go from poor but acceptable to just poor when we look at the total access time. This test takes latency into account and gives us greater insight into the user experience. Under very heavy loads, the 256GB Reactor stumbles, but the test looks much better under normal client workloads.

Latency builds on top of latency when one request has to wait on another to complete. The demons from the previous set of tests carry over to the notebook battery life test. The two larger Reactor models both performed at the top of the list against drives with similar capacity. The 512GB model delivered just over 687 minutes of on-battery time. The extra latency means the drive has to work longer before dropping down to idle, power-saving states. This hurts battery life and is the reason regular four-corner power measurements do not mean less power consumption over time.