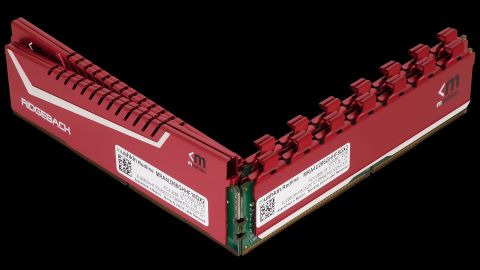 Mushkin’s 16GB DDR4-2666 kit performed adequately and is priced well, but that isn’t enough to displace the already-entrenched competitors.

Some of our memory recommendations from last year are of the market, but the locked versions of Intel’s mainstream platform never went away. B360 and H370-chipset motherboards still limit the firm’s Core i5-and-higher processors to a DDR4-2666 maximum, and using these boards with a Core i3 or lower reduces that limit to a paltry DDR4-2400. This, in an enthusiast market where DDR4-3200 has become mainstream. We can only hope that Intel’s next “locked” mainstream platforms make the leap to higher memory clocks, but until then, those of us who haven’t stepped up to a Z370 or Z390 board still need memory, which brings us to this pair of kits from Mushkin.

Interest in H370- and B360-compatible memory is so low that most of our contacts didn’t even have samples, but Mushkin cared enough about our community that it took the extra time and effort to come up with two kits, its Redline Ridgeback MRA4U266GHHF16GX2 (2x 16GB) and its standard Redline MRA4U266GHHF8GX2 (2x 8GB). Other than the heat spreaders, the only difference between these two is that the 32GB kit populates both sides of each module with 8Gb (eight gigabit) DRAM ICs (chips), while the 16GB kit’s modules have only one populated side. This corresponds to the terms “dual-rank” and “single-rank”, where a “rank” is the collection of ICs that populate one of the module’s two 64-bit interfaces.

Both kits need XMP mode to enable DDR4-2666 data rates at 16-17-17-36 timings, even though neither profile required more than the standard 1.20V. If you figure out after you buy either kit that your CPU doesn’t support this data rate (because it’s not a Core i5 or better), or that your motherboard doesn’t support XMP mode, you’ll be stuck at DDR4-2133 CAS 15. Of course, you can always try configuring your memory manually.

Being stuck at DDR4-2666 or lower memory speeds doesn’t mean we can’t at least try for better performance: Bumping the voltage up to 1.35V helped the Mushkin 32GB and 16GB kits remain stable at 13-15-15 and 13-14-14 timings, respectively. Unfortunately, both G.Skill and HyperX Gaming kits undercut the latencies of Mushkin’s 32GB kit.

Though it finishes Sandra Memory Bandwidth in third place, the 32GB Mushkin kit is close enough to its rivals to potentially compete for a value award. Mushkin’s 16GB kit fares slightly better against competing 16GB kits.

F1 2015 shows some oddly spectacular results for nitpickers: Both of Mushkin’s kits fell behind rivals at XMP settings, but both also excelled at custom-tuned settings.

Remembering that less task completion time means more performance, we see that Mushkin’s 32GB kit lagged slightly behind its rivals in 7-Zip, and that its 16GB kit beat them in custom tune. Whether or not advantages this small are worth the effort of tuning are up to you, but doing so did shave nearly a minute off a 12-minute encode here.

The surprising part of this evaluation is that the Redline Ridgeback 32GB kit was cheap enough to beat even G.Skill’s value-series Ripjaws V. Just a few dollars difference was enough for the 32GB kit to steal the 32GB value crown.

As for Mushkin’s 16GB kit, it faltered in value to the Ripjaws V. You win some, you lose some. But pricing often shifts, and if the winds of commerce blow in Muskin’s favor, either kit should serve builders or upgraders on Intel’s lesser chipset platforms well.