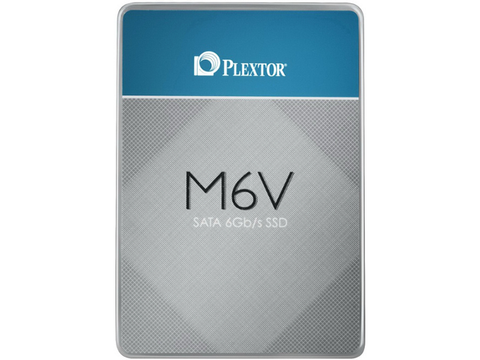 The M6V packaging is different from the models before it. Plextor chose a blue and silver color scheme to showcase this model. The back of the package does list four-corner performance data for all three capacities offered in the 2.5-inch form factor.

The M6V's case design is also different from Plextor's other M6-series SSDs. It's stamped, thinner and costs less to manufacture. Fortunately, the enclosure still fits in notebooks that require a 7mm z-height.

I was surprised to find a full-length PCB inside the M6V case. So many modern drives employ half-length boards, and we're even seeing one-third-length PCBs now. It looks like Plextor uses the same board for all three capacities.

The SM2246EN is a go-to controller for companies not rolling their own silicon, in part because Silicon Motion allows its partners to customize the firmware.

The M6V uses a single DRAM package. Our sample shipped with a module from SK Hynix. And of course, Toshiba 15nm single-plane MLC was the flash choice. This 256GB drive uses eight NAND flash packages, all on one side of the PCB.

Silicon Motion doesn't use data compression to minimize writes to the flash. As a result, its controller's performance with compressible and incompressible data is nearly identical.

It's refreshing that we don't have to talk about TLC-imposed performance roll-off after the SLC layer fills with data. It's really important to remember that Plextor's M6V uses MLC flash. It's the drive's main selling point, and one that Plextor hopes you'll spend an extra $20 to $30 on.

Prev Page Specifications, Pricing, Warranty & Accessories Next Page Four-Corner Performance Testing
10 Comments Comment from the forums
Be In the Know