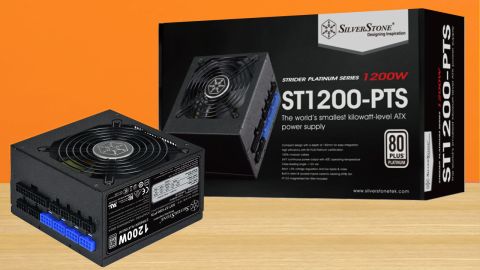 The ST1200-PTS is the smallest 1200W PSU available, but to hit that tiny size, it compromises a bit on performance.

The SilverStone ST1200-PTS is the smallest power supply with 1200W max power available in the market today. So, if you really want so many watts out of such a small PSU, there is no alternative. The unit also manages to achieve low noise output under light and mid loads, something impressive given its overpopulated PCB and the fairly small, 120mm, fan. Nonetheless, performance-wise it doesn't stack up so well against similarly priced and capacity PSUs, which have notably larger dimensions though.

SilverStone is a huge supporter of PSU downsizing with the majority of its portfolio consisting of compact models. The new members of the Strider Plus Platinum line, with 1000W and 1200W capacities, follow this trend and with only 140mm depth, they win the titles of the smallest units in the corresponding categories. The ST1200-PTS is an amazing feat, since despite its small footprint, its 12V rail can deliver up to an impressive 100 Amperes! According to SilverStone, the power density in this unit reaches 664W per liter, while for the ST1000-PTS it is 554W per liter. For comparison purposes, it is worth mentioning that the older ST1200-PT and ST1000-PT models have 40mm more depth, reaching 180mm in total

The ST1200-PTS is 80 PLUS Platinum certified while, in the Cybenetics scale it scores an ETA-A+ efficiency level, which usually is only achieved by Titanium units. This means that it uses a highly-efficient platform for which the Platinum requirements are a walk in the park. The Cybenetics noise certification, LAMBDA-S++, is satisfactory given the PSU's super-small dimensions and the small cooling fan.

All cables are fully modular and the number of provided connectors is satisfactory. The 24-pin ATX and one of the two EPS cables are long enough, but it would be nice if the second EPS along with the PCIe cables were longer. Ideally the second EPS cable should reach 600-650mm and the first PCIe connector should be at 600mm. SilverStone thought though that most likely such a small, in dimensions, PSU would be installed in smaller chassis and not in full-tower ones.

Thankfully the distance between the peripheral connectors is ideal, at 140-150mm. The only downside is the FDD connector, which should be provided as an adapter instead of being fixed on the cables. The majority of users won't need this connector, so why have it permanently installed?

The PCB is small but includes all parts required for providing more than 1200W of power. In the primary side we meet an interleaved APFC converter, where two APFC converters operate in parallel with a phase difference between them. This minimizes input/output current ripple and lowers conduction losses, increasing efficiency and doubling the effective switching frequency.

On the secondary side Enhance Electronics, the manufacturer of this unit, utilized a synchronous rectification design for the regulation of the +12V rail. The minor rails are generated through a couple of DC-DC converters, which are installed on a PCB right beside the modular one. This way the power transfer losses are minimized. Finally, all filtering capacitors are of high quality with the majority of them being polymer ones.

We fully dismantled the fan, to find out its bearing type. As you can see from the photos above, it is a rifle bearing. Unfortunately the fan didn't survive the procedure.

The modular board was hiding the DC-DC converters that generate the minor rails, so it had to be removed. The same PCB that houses those converter also hosts the supervisor IC, a SITI PS223.