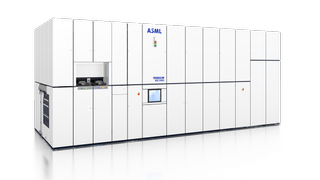 EUV manufacturing has just barely begun, and EUV systems supplier ASML may already face some supply issues: as part of its third-quarter earnings release, ASML disclosed that it had received 23 orders for EUV systems. That’s as many systems as the company delivered in the last four quarters combined. The Dutch company delivered seven EUV systems in the quarter and shipped the first of the new NXE:3400C EUV system with 170 wafers per hour (WPH) throughput.

This marks the second consecutive quarter where ASML received more EUV system bookings than shipments. In the first quarter, the company delivered four EUV systems and received three bookings, followed by seven deliveries and ten bookings in the second quarter. In the third quarter, the number of bookings yet again increased significantly to 23 units. This resulted in a record $5.7 billion in net bookings, over twice its net system sales for the quarter; most of the net bookings were EUV, ASML said. Deliveries stayed flat at seven units, with an average selling price per unit of $118 million.

This amounts to 36 EUV bookings so far in 2019, giving ASML quite a backlog of orders to chew through, on the order of 40 units, according to WikiChip. As the reason for the sharp increase in EUV bookings, ASML said that customers became more confident in their plans for logic and DRAM, denying that customers fear to end up in the back of the queue, and also saying that customers know ASML’s production capacity.

ASML had previously stated that it wanted to deliver 30 systems in 2019. At 18 deliveries so far though, which is as much as it delivered in 2018, ASML won’t be able to fulfill this goal: the company says it has eight deliveries planned for the fourth quarter, at a $132 million ASP, for 26 systems total in 2019. According to WikiChip, there should be 45 NXE:3400B EUV systems in the field by the end of the year.

As the company had indicated previously, it has pushed out four system shipments to early 2020 due to temporary supply constraints. ASML says it has a production plan for about 35 shipments in 2020, which includes the four delayed ones. ASML did say that it could increase this somewhat but is being conservative. It also says it could produce up to 50 systems per year in the longer term without adding extra manufacturing space.

The third quarter marked the first shipments of the new NXE:3400C EUV system: three of the seven were of this new system. It is rated at 170WPH compared to the 125WPH of the NXE:3400B, a 35% increase in productivity. This drives a fast adoption and makes it the workhorse for EUV lithography for the foreseeable future: six of the eight systems for Q4 will be the NXE:3400C, and all systems planned for 2020 are expected to be that model. Beneficial to ASML, it carries a ~30% higher selling price.

Both TSMC and Samsung have started production of their 7nm and N7+ process nodes with EUV (with the NXE:3400B), with more extensive use of the technology planned for 5nm next year. ASML projects on average 10 layers on 7nm and 20 layers on 5nm. (And one 45k wafer per month fab would need one tool per layer.) Intel too is busily working to equip its Arizona Fab 42 with $7 billion worth of tools for 7nm production in 2021. ASML says the NXE:3400C will also be used for the DRAM 1z and 1a nodes for a couple of layers.

In Q3, ASML earned $3.3 billion in revenue, of which $2.6 billon were net system sales. Of those, almost 80% were for logic applications. Net income came in at $700 million and gross margin was 44%. R&D expenses were $550 million. For the fourth quarter, ASML is expecting $4.3 billion in revenue.