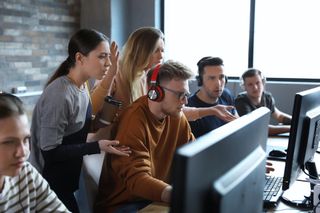 Nvidia officially launched its GeForce Now game streaming platform earlier this month. The company promptly had to remove titles published by Activision Blizzard from the service, but it seems like at least some of those games might return to GeForce Now after what Nvidia called a "misunderstanding" between the companies.

"Activision Blizzard has been a fantastic partner during the GeForce Now beta, which we took to include the free trial period for our Founders membership. Recognizing the misunderstanding, we removed their games from our service, with hope we can work with them to re-enable these, and more, in the future.”

That statement doesn't exactly inspire confidence in GeForce Now's launch. It would be one thing if Nvidia included access to an indie game during the service's beta. This mixup concerned one of the world's largest video game publishers--Activision Blizzard publishes Call of Duty, World of Warcraft and many other titles--at launch.

Activision Blizzard wasn't the only publisher to pull its titles from GeForce Now after its official debut, either. Companies such as Electronic Arts, Capcom, Rockstar and Square Enix also pulled their games from the service right after it launched. Its game library was one of GeForce Now's selling points; now it's a cause for concern.

But at least it seems like Nvidia's hopeful that it will convince Activision Blizzard (and presumably other publishers) to return to GeForce Now after its launch mixup. We suspect that Nvidia's just hoping it won't end up like Google waiting around for companies to make their games available on its game streaming platform.