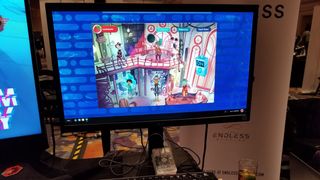 Though Raspbian is the official operating system for Raspberry Pi, the platform has a number of OSes available for it, including Windows 10 IoT Core, Ubuntu Core and OpenElec. Very soon, we'll be able to add a new name to this list: Endless OS. Here at CES 2020, Endless Inc. showed its operating system running on a Raspberry Pi 4 B with 4GB of RAM, and company founder Matt Dalio said that a public beta should be available within the next few weeks.

Endless OS is a simplified version of Linux with a very user-friendly interface that makes it easy to find and install apps. The operating system has been available for years as a free download for PC users and comes preloaded on a few laptops, including some Acer models, but it has never run on Raspberry Pi before.

Endless is also the operating system that powers the Hack children's laptop. A copy of the Hack software, which teaches kids about computers and programming, will come preloaded with Endless for Raspberry Pi.

We didn't love the Hack software when we reviewed the company's laptop, which comes with it preloaded, because we found that there were not enough lessons and that many of them were more complicated than helpful.

However, Endless Inc. has made some major changes to Hack's interface and added a slew of new lessons since our review. More importantly, the software is now completely free (the company had previously said it planned to start charging a monthly subscription fee for updates).

Endless OS looks and feels more polished and, dare we say, Windows-like than most other desktop Linuxes. So whether you're an adult or a child, this could be the right Linux for you.

Endless Inc. company reps said that, when it's available for download, the Raspberry Pi version of the operating system will require a Pi 4 B, but it remains unclear whether you'll need a Pi 4B with 4GB of RAM or if a 2GB or 1GB model will work. The demo unit we saw at CES had 4GB.

Reps also told us that the Raspberry Pi version of Endless OS is likely to include some Raspberry Pi-specific apps preloaded. No word on what apps these could be, but Minecraft: Pi Edition would be one obvious choice.