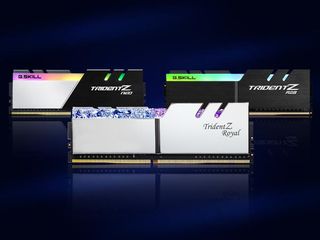 G.Skill today announced some new 32GB RAM kits with capacities ranging from 64GB in dual-module kits to 256GB in kits with eight DIMMs. The best part about these modules is that they feature very low timings for their capacities, meaning they should offer both high-capacity and snappy memory at once when they arrive in Q1 2020.

The 32GB modules will run at 3,200 MHz DDR4 speeds with CL14 timings. More pacifically, the CL timings are CL14-18-18-38. G.Skill has validated these clocks and timings on the latest Intel and AMD HEDT (high-end desktop) platforms, as well as AMD's mainstream X570 platform, which doesn't always happen at the performance limits.

It should be noted though that G.Skill is known for pushing its modules to their absolute limits with its testing, so we'd hold off on putting any numbers on real-life performance until we do some testing of our own. With Intel XMP 2.0 profiles, however, chances are you'll be fine.

No word on pricing yet, but we'll stay tuned to see these RAM kits arrive early next year.