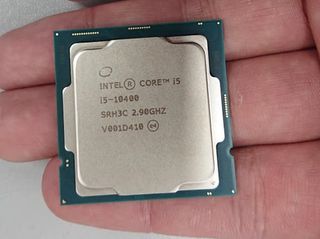 It's no secret that the coronavirus is wreaking havoc on the tech industry's supply chains, and after almost all tech events got canceled or changed somehow, it wouldn't be surprising to see product launches delayed, too.

This could be the case with Intel's upcoming 10th Gen desktop CPUs. Unikoshardware.com spotted pictures of the upcoming Intel Core i5-10400, as well as a slide that claims to come from Intel.

The slide details what Intel employees are and are not allowed to tell the media, but the most notable line is the "Press News Embargo: April 13 - June 26, 2020."

Assuming this is a legit slide, it tells us that there is no set embargo date yet for the chip's release. Thus far, many rumors have pointed to April or May release dates, but it looks like that may or may not happen. With the coronavirus outbreak causing problems in the supply chain, it wouldn't make sense for Intel to release its new CPUs if its partners aren't able to produce the motherboards to support the chips. Computer Base from Germany also shares these concerns.

Nevertheless, we have to consider a more likely alternative. April 13 could be the day Intel will hold the general introduction of the chips, proceeding to announce the lineup of CPUs between then and June 26, each with their own specific embargo date.

In the meantime, feast your eyes on what may be the first picture of the Intel Core i5-10400. This chip is expected to feature six cores and 12 threads and run at a base frequency of 2.9 GHz with boost up to 4 GHz. It'll also reportedly come with a 65W TDP, though it's also known that Intel's TDPs are not a measurement of the maximum power consumption.