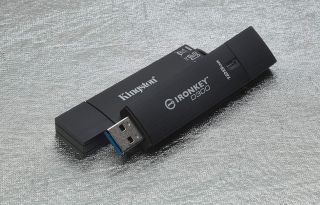 Impressively for Kingston, it's not its first drive to receive this certification either, in an official statement the company said: "We are pleased that the IronKey D300 series drives are now certified, joining some of our previous encrypted USB drives that were certified in the past, like the D100 and D200. This signifies to customers that IronKey is a well-known and trusted brand throughout NATO and its member government agencies for securing data on a restricted level, Kingston is committed to creating encrypted USBs that protect military and government level data, so customers with strong data protection requirements can be assured that it will meet their data security demands when sensitive data is in transit."

Not only does the drive come with some of the best hardware encryption around, but it's also one rugged bit of kit too. As standard it uses a digitally signed firmware, and also enforces "complex password protection". The overall casing is zinc and has a "tamper-evident epoxy seal" too.

Kingston also offers two additional variants of the D300 IronKey the D300S and the D300SM bringing two additional features, including a unique serial-number and barcode printed on the drive, and support for a virtual keyboard, allowing the user to enter the password via mouse clicks instead of a physical keyboard to reduce the chance of keylogger interception. Neat huh?

All of those features make the IronKey D300 a fairly pricey flash drive too. The 4GB model alone will set you back $64 on Amazon.