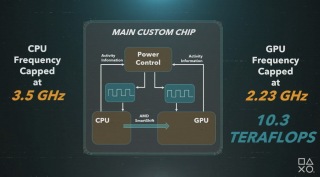 In a live stream today, Sony's lead architect for PlayStation 5 Mark Cerny, spilled some technical details about the PS5.

"The feature most requested by developers was an SSD," Cerny said. But for PS5, the GPU was the hardest part to integrate, in an attempt to get cutting edge tech but also not need too much time for developers to get to speed.

"Developers were banging up against the limits of the hard drive," Cerny said. For PS4, a hard drive could take up to 20 seconds to load 1GB of data, he said. And 1GB is often on the low end of data to wait for.

But on PS5, there will be more bandwidth and no seek time. He said for 2GB, you can load in 0.27 seconds. This can also reduce the time for fast travel in adventure games, which often, funnily enough, includes load screens. Games could just fade out and in, rather than putting in long elevator rides or other ways to hide environments.

Using an SDD can also lead to faster streaming from storage. On HDDs, developers may have to duplicate the environment. Additionally, on an HDD, patch installs can take a long time because they need to add a new file. But with PS5's SSD, this isn't necessary.

"No installs as you know them today," Cerny said.

The PS5 will also have 16GB of GDDR6 RAM. Games and loading should be 100x faster, Cerny said.

There's also a custom flash controller for the SSD with a 12-channel interface with bandwidth of 5.5 GBps. The "natural size," Cerny said, is 825 GB. But after looking at player patters, Cerny said that redownloading wouldn't cause much friction.

The flash controller will connect over PCIe 4.0 to the PS5's main custom Zen 2 chip.

You can also install via an external HDD for older PS4 games. The PS5 will also support certain M.2 PCIe SSDs on the market. Those commercial drives need to reach (or beat) the same 5.5GB/s that Sony is promising.

M.2 drives with PCIe 4.0 should support that, but those will have their own flash controllers. Sony says it's compatibility testing and benchmarking drives to come up with a list of which drives will fit in the PS5 and which have worked well in testing. It's possible that won't be available until after launch, Cerny said, so don't plan on buying a drive today and using it in your PS5 later.

"We need higher performance per watt," Cerny said. But besides being efficient, Sony also wanted backward compatibility, which he said "AMD handed masterfully." The GPU will also support new shaders and ray tracing.

The GPU is a custom chip based on RDNA 2 technologies, and it will have lower power consumption than previous chips. But Sony said it had its own needs, which meant they had to partner with AMD, and that its needs may even affect PC GPUs. But some stuff is just in PlayStation.

"If you see a similar discrete GPU" at the same time, "that meant our collaboration with AMD succeeded." He suggested that it doesn't simply mean they put a PC part in their console.

The logic from PS4 had to be incorporated into PS5, though most games should work at launch. Apparently, the boosts are "massive," which could cause some issues.

A new feature called the Geometry Engine is a feature in the PS5. It allows for primitive shaders to "synthesize geometry on the side" to be rendered, as well as improvements to visual effects.

Ray tracing is also coming to PS5 through RDNA 2. Ray tracing won't be required, but developers can use it for audio, global illumination, shadows and reflections. Cerny said he's seen one game only seeing modest performance hits from illumination and shadows. Cerny also mentioned the BVH (Bounding Volume Hierarchy) for ray tracing, suggesting the core hardware functionality will be similar to what Nvidia is doing (though we lack details at present).

Cerny said he likes to run GPUs fast, but that comes with challenges in power consumption and heat. The PS5 will use 36CUs. The CPU and GPU will run in constant boost mode and should normally be close to the maximum clock speed, but in some worst-case situations it may down-clock, "but not too far." He said that the cooling solution will be unveiled in a later teardown.

Like some gaming laptops, the PS5 will use AMD's SmartShift technology to move power between the CPU and GPU. The GPU frequency is capped at 2.23 GHz, or 10.3 teraflops. The CPU is capped at 3.5 GHz.

Cerny said sounds through any output should get 3D audio, focusing on "presence and locality."

He said Sony had to build a proprietary algorithm and audio unit. Sony calls it Tempest 3D AudioTech. The hardware itself, based on AMD's GPU design, is called the Tempest Engine. Cerny referred to it as an SPU.

Players may use TV speakers, headphones or surround sound. But to get 3D audio out of that will be a multi-year process. Headphones are largely already done. For TV speakers and stereo speakers, Sony is still working on a stereo surround spot based on sitting in a sweet spot on the TV.

Some games in development are already using this tech, though some will let you switch between PS4-style dual-channel audio and surround sound.

There's a lengthy discussion of HRTFs (head related transfer functions), which are used to create 3D audio out of just two speakers. It's a complex subject that has been researched for decades. The difficulty with HRTFs is that every human has a unique profile. Sony tested hundreds of people to measure their HRTF, and then created a 'default' profile that should work well for a lot of people. However, there are outliers, and Cerny said the PS5 will likely come with five audio profiles to choose between, allowing users to select which one best matches their own physiology.

Cerny referred to this area as a research topic, and suggested further tuning could come later.

18 Comments Comment from the forums
Be In the Know