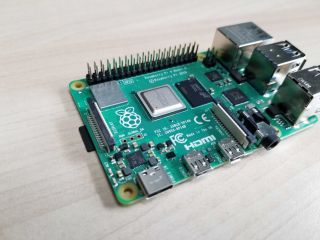 The Raspberry Pi 4 Model B single-board computer launched last year in three variants, the first time the family had been broken into more than one variant per model: An entry-level version with 1GB of RAM, designed to hit the increasingly-challenging and shrinking-through-inflation $35 target price point; a more expensive 2GB version, designed as to the go-to model; and a 4GB variant for power users.

In the months since, the Raspberry Pi team has had a rethink: The 1GB model has been retired, while the 2GB model has been moved down to the headline-grabbing $35 entry point. Now the 4GB sits in the middle, with a brand-new Raspberry Pi 4 8GB model taking the top spot - but how much RAM does a single-board computer really need?

“The 8GB model is about wanting to provide a platform for power users, and wanting to do that just as soon as the technology is ready,” Raspberry Pi Trading chief executive Eben Upton tells us in an interview on the subject. “We're launching this product absolutely as soon as we can - there's no synthetic delay in this product. If we could have launched this product on day one, we would have done. But it, the technology just wasn't there yet.”

The technology in question: A single-package 64Gb DRAM module, allowing the same board design which supported up to 4GB to expand to 8GB. That’s as far as the Raspberry Pi 4 is likely to go, at least for the foreseeable future: “There's an SoC [System-on-Chip] upper limit, which is 16GB,” Upton explains. “There really, really isn't a 16GB package that we could use, or a way to use a pair of packages, so I think this is probably the end of the road for Raspberry Pi 4 in terms of memory capacity.

“You know, when we launched last year this 8GB package didn't exist, but we sort of suspected it might come to exist. The ones we're using are literally some of the first off the line. This really is a brand-new, shiny memory technology.”

The table below outlines the three models which make up the Raspberry Pi 4 family, revealing the big secret: There’s effectively no difference bar the memory capacity on offer. You won’t even find a difference in weight or power needs.

That’s not to say there aren’t any minor differences you won’t find by perusing the above table: Since the original launch, the Raspberry Pi 4 schematic has undergone a series of design tweaks - the most major of which is a change to the power circuitry to fix a design flaw which prevented the use of e-marked USB Type-C power cables. These, however, apply across the board: Buying a new-stock 2GB, 4GB, or 8GB should get you the same board revision.

With the original 1GB model out of the picture and the 2GB variant reduced in price accordingly - the result, Upton tells us, of the 2GB module falling in price enough to bring down the total bill of materials - this marks the entry point into the Raspberry Pi 4 family; if you want to spend less, you’ll either be hunting around the second-hand market for a 1GB model or picking up a last-generation Raspberry Pi 3 Model B+.

2GB doesn’t sound like a lot of memory in a world where even entry-level smartphones frequently boast 4GB, but in the embedded market it’s a decent chunk. It’s enough, too, to use a Raspberry Pi 4 as a responsive desktop for most tasks: Web browsing with multiple tabs, productivity software, and programming all run perfectly well on the Raspberry Pi 4 2GB.

There’s a reason for that: “Compared either to a Windows platform or even to a traditional Linux platform, there's been a sort of relaxation,” Upton explains. “As there's been more memory people have loosened their belts a little bit and sort of flumped down and started consuming more memory, when we really haven't. We're still using an LXDE-derived desktop environment, we do care about every 10MB. It's the reason why the 2GB is our really, really useful desktop.”

The 2GB model is also the only one available at the Raspberry Pi’s headline $35 price point - a price which has remained stable since the launch of the original Raspberry Pi Model B, a single-core device with just 256MB of RAM, despite inflation continuously lowering the buying power of that $35 in real-world terms. If you’re on a budget, and don’t think you’ll be throwing anything too taxing at it, the 2GB model is definitely the one to pick.

The Raspberry Pi 4 B (4GB) has been the most popular version since launch, largely thanks to a relatively small price difference between it and the now-retired 1GB which gets you four times the RAM. It was also the highest capacity version prior to the release of the new 8GB model, and as a result the go-to choice for power users.

Having 4GB of RAM offers you a little more breathing room. You won’t see too much of a difference for basic desktop use - 2GB is plenty there - but if you find yourself multitasking the extra RAM will definitely come in handy.

There are other reasons to go 4GB, too: The additional 2GB of RAM can serve as file cache, speeding up commonly-accessed data which would otherwise have to come via USB or the relatively slow microSD card. It allows you to dedicate more RAM to the GPU, which shares its memory with the CPU - though you won’t find that making any difference to the maximum supported display resolutions.

For the majority of users, 4GB will be plenty - and if you picked one up before the launch of the new 8GB model, you certainly shouldn’t feel like you need to rush out and upgrade any time soon.

The Raspberry Pi 4 B 8GB now represents the pinnacle of the Raspberry Pi 4 family. Before you rush out to pick one up, though, there are a few things to know - starting with exactly how you can make use of the extra RAM.

Backwards compatibility is a blessing, but also a curse: To maintain compatibility, the official Raspberry Pi OS is based on a 32-bit kernel. Normally, a 32-bit machine can’t access more than 4GB of RAM; in modern systems, physical address extensions (PAE) are used to unlock RAM above this limit - and it’s these extensions which allow Raspberry Pi OS to see the full 8GB on the latest Raspberry Pi 4.

The 32-bit kernel is joined by a 32-bit userspace, however: While the kernel can see and use all 8GB, any given process on the system is limited to 4GB. In other words: If you’re running a single application which doesn’t fork into multiple processes, it’ll only ever be able to grow to half the 8GB available

It’s a limitation, but one which doesn’t apply to every workload: Multitasking, by its very nature, involves opening multiple applications, each of which has its own 4GB limit; many computationally-intensive programs fork to take advantage of multi-core processors, and in doing so also bypass the 4GB-per-process limit. The Chromium web browser treats each tab as a separate process so you can indeed use more than 4GB while surfing the web.

There are other ways to take advantage of the extra RAM: Virtual machines and containers each have their own 4GB limit, meaning it’s possible to run a VM with 4GB of RAM and still have 4GB left for your own use; you can create RAM disks for extremely rapid access to data; those running web or database servers will find themselves able to support more simultaneous clients and even to run databases entirely in-memory; and it offers additional headroom for machine learning models.

If you’re after the very best Raspberry Pi money can buy, the 8GB model is the obvious choice - so long as you go into it with an understanding of its limitations.

The Future is 64-bit

The issue of running a 32-bit operating system on a 64-bit processor with 8GB of RAM is something of which the Raspberry Pi Foundation is only too aware, and is therefore testing a 64-bit  version of the operating system, which you can download now. This early beta is, like Raspbian, based on Debian Linux, but don't call the new OS "Raspbian," as that name is still reserved for the 32-bit operating system.

"Obviously, we're going to keep supporting 32-bit," Upton said. "because there's a lot of hardware in the field and we still have Raspberry Pi Zero - so we still have a first-class product which is 32-bit only."

If you don't want to try the beta or wait for a final version of the 64-bit OS, you have alternative options in the form of third-party operating systems. Canonical’s Ubuntu Server is available in both 32-bit and 64-bit flavors, and can be turned into a desktop OS post-installation. OpenSUSE, the first third-party OS to support 64-bit back in the Raspberry Pi 3 days, is another alternative.