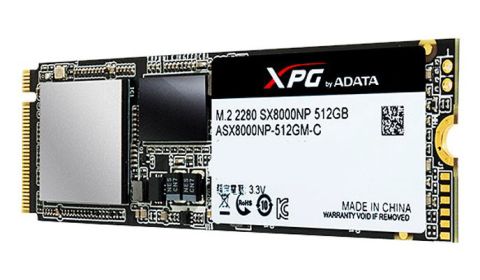 The NVMe 512GB-class should be the most popular of all consumer SSDs for our readers; it offers the best mix of performance, capacity, and cost. Pricing starts out at just $179.99 for the Intel 600p but escalates quickly due to NAND type and cooling options.

The MyDigitalSSD BPX 480GB is the current value leader at $199.99. It ships with a 5-year warranty, just like the Intel 600p that gained popularity due to its tier-one manufacturer. The Samsung 960 EVO is at the upper limit of the value segment. It's priced at $249.99 like the Adata SX8000 we're testing today.

The Intel SSD 750 series (with just 400GB), OCZ RD400, Plextor M8Pe, and Samsung 950 Pro all make up the premium price tier but offer the performance to justify the additional cost. Although we have one available, we didn't include the Western Digital Black PCIe SSD. We will add it as a comparison drive in future reviews. You can read the review here.

Even though we have a wide range of products in our test, we focus on the low-cost 960 EVO, 600p, BPX and the XPG SX8000 models. The others are nice to look at, but the wide price difference places them in a different tier.

The SX8000 and Intel 600p deliver nearly identical sequential read performance. The drives share the same SMI SM2260 controller but employ different firmware. The NAND also comes from the same manufacturing facilities, but the CMOS-under-array programming is different. We will see several differences between the two drives, particularly during write workloads, as we progress through our test suite.

The MyDigitalSSD BPX, also known as the third wheel in the low-price NVMe space, delivers higher sequential read performance than both the SX8000 and 600p. This statement will become fairly redundant throughout the review and come in various forms.

The sequential write test reveals that Adata has greatly improved the SX8000's write performance compared to the Intel 600p. The SX8000's write performance doesn't rise much as we increase the queue depth. The OCZ RD400 begins thermal throttling during our test, and the Samsung 960 EVO goes through SLC to TLC transitions (as well as a possible thermal throttle condition). The other NVMe drives provide fairly steady performance.

The SX8000 provides 400 MB/s more sequential write performance than the older 600p. The difference holds steady for most of the test as we intensify the workload with higher queue depths. The BPX is a bit over 200 MB/s faster during the same tests.

The Adata SX8000 achieves class clown status during our random read performance test as it delivers wildly inconsistent performance. Our current test uses a set of parameters that many TLC-based drives do not respond well to, but we rarely run into any issues with MLC-based products. We've worked with SMI, Phison and other controller manufacturers on our new testing and are in the final stages of development. Even with the new test, the SX8000 exhibits strange behavior during random read workloads.

The random write tests are in line with our expectations. The SX8000's extensive cache system with both DRAM and pseudo-SLC gives it a boost over the Intel 600p. The SX8000 utilizes the cache programming so well that it even outperforms the MyDigitalSSD BPX 480GB at low queue depths.

The cache helps the SX8000 perform really well in the mixed sequential test compared to the other low-cost products. It's well above the Samsung 960 EVO 500GB with TLC and the MyDigitalSSD BPX with MLC flash.

The SX8000 lands in the middle of the pack during the mixed random test. All of the SSDs are very close together at low queue depths.

We didn't expect the Adata XPG SX8000 to perform this well in steady-state conditions. The performance with 100% writes is of particular interest because there is an 800 MB/s delta between the SX8000 and the Intel 600p. We can attribute the disparity to the difference between IMFT TLC and MLC.

We see that trend carry over to the random steady-state test. In the second chart, you can clearly see the SX8000 deliver more than twice the random write performance of the 600p. The performance is also more consistent.The SX8000 is still not a viable product for use in RAID, but it's the best we've seen with the SM2260 controller.

Adata still has some work to do to keep pace with the other drives in daily use software. The random read performance issues carry over here, nullifying the gains Adata made in other areas. This highlights that applications are very dependent on low-QD random performance.

The Adata XPG SX8000 is a step up from the 600p, but it also carries a large price premium over Intel's value-focused NVMe model. The MyDigitalSSD BPX 480GB still outshines the other comparable SSDs in the $180 to $250 price range. If you are a price conscious shopper, the BPX still offers the best value for desktop use. The 960 EVO is not far behind.

The PCMark 8 Extended Storage Test shows why an SLC cache is not a suitable replacement for pure MLC muscle. The SLC buffer fills during a heavy workload. The SX8000 has an SLC-programmed buffer, but the data folds into the MLC at a lower speed. There isn't a direct-to-die write mechanism in place, so all data passes through the SLC layer first. The SM2260 is only a dual-core controller and the background activity taxes the processor. That increases latency, thus slowing every measurable aspect of the drive. The performance tax lasts well beyond the time it takes to fold the data from the SLC to the MLC. The drive also has to TRIM the dirty cells to prepare the drive for more data. The background activity adds to the amount of time the processor is occupied with flash management tasks.

The service time tests verify our theory. The SX8000 takes an extended amount of time to recover. There is a five-minute pause in host-initiated disk activity between each of the recovery phases of the test. That isn't enough time for the dual-core controller to handle all of the background activity on a drive that's nearly full of data.

The disk busy time results appear nearly identical to the service time tests. During moderate use, the background activity will draw enough power to decrease the notebook battery life and keep this drive outside of the top performance tier.

The Responsiveness Test comes from BAPCo's new SYSmark 2014 SE suite. The test gives us a number of performance scores based on different workloads and power consumption data recorded through a Watts-Up meter. Most of the tests are focused on CPU and overall system performance, but we're interested in the latency recordings.

For the most part, the SSDs are very close in the Responsiveness Test. The sole exception is the MyDigitalSSD BPX 480GB with SanDisk NAND. The Adata XPG SX8000 falls to the bottom half of the chart. The SX8000 also consumes more power than the other NVMe SSDs to perform the same tasks.

We use BAPco's MobileMark 2014 v. 1.5 suite for our notebook battery life tests. BAPCo designed the software to compare different notebooks, but we purposed it to compare SSDs under real-world application workloads. The Adata XPG SX8000 512GB delivers just under five hours of power-on time in our Lenovo Y700-17 gaming notebook.