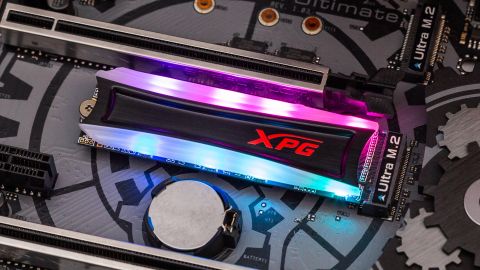 The S40G delivers performance that lands between entry-level and mainstream, but its looks are top-notch. With one of the best looking RGB implementations available, the S40G is a sleek M.2 pick if you want some flashy SSD goodness in your life.

When it comes to building a new gaming rig, getting the right RGB accessories can be essential to making or breaking your rigs' aesthetics. It isn’t an easy task to do for everyone, but with some effort, you just might pull off the right look.

We’ve seen many RGB build disasters, so we’ve done our best to guide our readers into buying some of the better choices. First, you have to choose the platform/motherboard, then the case to put everything in along with the fans. Then you need to choose the cooler, the RAM, and the GPU to go with it. Even your PSU can come with RGB if you like. Not to mention mice, keyboards, and speakers. But what about your storage?

Today, we're looking at a mainstream SSD that adds a bit more to the complexity of upgrading or building your next PC: It is Adata’s XPG Spectrix S40G, and it promises to increase your RGB level +1 as well as store up to 2TB of your data.

The Spectrix S40G is built with Realtek’s high-end RTS5762, an eight-channel PCIe 3.0 x4 NVMe 1.3 SSD controller, paired with Micron’s 3D TLC flash. This combo enables up to 3.5 GBps of sequential read throughput and, due to its large dynamic write cache, up to 3.0 GBps of sequential write throughput. It is also rated for up to 290,000 / 240,000 random read/write IOPS.

As well as the power to hit impressive performance numbers, the drive can also do it while keeping your data secure with 256-bit hardware encryption. It also features hefty endurance ratings, too. Similar to Adata’s XPG SX8200 Pro, endurance ratings range from 160TB at the smallest capacity up to 1,280TB at the 2TB capacity point, which the company backs with a five-year warranty.

Adata supports the S40G’s RGB via an XPG RGB software that is available for download on the company’s product page. You can save multiple profiles, and each RGB LED is individually addressable right through the M.2 interface. That means no extra cables are required.

If you would like to monitor your drive with an SSD toolbox, Adata also has one available for download, too. You can also download a copy of Acronis True Image HD for free to clone over your existing data, or just make simple system images while using the drive.

Adata’s XPG Spectrix S40G is quite aesthetically pleasing. It comes in an M.2 2280 form factor and features a black PCB that helps it blend into any style build. Eight LEDs enable the RGB goodness, and they are diffused by a streamlined heatsink-styled piece of plastic.

The Realtek RTS5762 that powers the S40G is different from the RTS5763DL that powers Adata’s XPG SX6000 Pro we recently reviewed, with the main difference being that this controller features a DRAM-based architecture. Similar to Intel’s SSD 660p, however, Adata infused the drive with a rather small 128MB DDR3L chip. The company might compress the LBA map, or just strategically cache frequently-accessed addresses, to pull off this feat.

Instead of getting the NAND pre-packaged from Micron, Adata actually buys and cuts up the actual NAND wafers and packages the NAND dies. Adata’s XPG Spectrix S40G utilizes Micron’s 3D TLC NAND flash, but the exact type is not guaranteed. The S40G will ship with either 64-layer or the newer 96-layer flash, depending on availability. Adata says both types of flash should perform similarly.