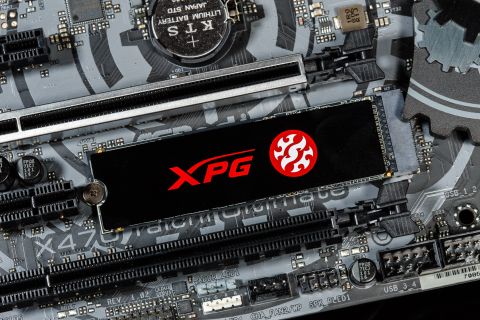 The Adata XPG SX6000 Pro's DRAMless design is meant to cut costs, but it limits performance while competitors offer faster speeds for the same price or less.

A Not So Extreme NVMe SSD

Armed with a Realtek NVMe controller and Micron’s 64L TLC flash, Adata’s XPG SX6000 Pro is an entry-level contender ready to take on the SSD market. But, unlike most SSDs, this device is DRAMless and instead, employs the NVMe Host Memory Buffer (HMB) feature to commandeer a few MB of DRAM from the host for the task. While this lowers manufacturing costs, it isn’t optimal for performance. And, with the 1TB SX6000 Pro weighing in at $120, its value isn’t the best.

Dropping DRAM out of the equation completely can sometimes hinder an SSD's performance significantly because flash management processes no longer have a fast cache buffer to retrieve FTL data from; instead everything has to work directly in the controller or on the NAND itself. But the trade-off is that it saves the manufacturer a sizable sum when producing them, a savings that should typically be passed down to the consumer in cheaper, more entry-level devices.

To keep costs down, but improve performance, the NVMe protocol was ratified to include HMB so that the controller can still have some DRAM space to help speed things up. Realtek’s RTS5763DL, the controller powering the SX6000 Pro does just that. It utilizes 64MB of the host’s DRAM to try to maintain acceptable performance under consumer workloads. It even features a rather large dynamic write cache to help mitigate slow direct to TLC write performance too. Although, this also means that, after the cache is full, write performance will degrade until it has ample time to flush the cache.

This SSD interfaces with the host via a PCIe 3.0 x4 link and communicates via the NVMe 1.3 protocol and initial specs look promising. It can hit up to 2.1 / 1.5 GBps read/write speeds under sequential workloads and its random 4K performance can hit upwards of 250,000 / 240,000 IOPS read/write. Not too shabby for a new kid on the block. But we will have to wait and see how that actually translates to real-world performance when we put it to the test.

Endurance figures are pretty good too, matching most other SSDs in the market. Our 1TB model is rated to write up to 600 terabytes before its 5-year warranty gets voided. Additionally, it offers standard features such as S.M.A.R.T. data reporting, Trim, and support for the Format NVM / secure erase command. It also has LDPC ECC, end-to-end data path protection, and boasts a RAID engine built in to maintain data integrity.

Included with the SSD itself is an optional black, metal heat spreader that has thermal tape pre-applied. As well, ADATA provides a download for Acronis True image HD, a disk migration utility, and an SSD toolbox to manage the SSD, from their website.

The XPG SX6000 Pro is an M.2 2280 form factor SSD that features a single-sided PCB design, meaning that there are components on only one side of it. Aesthetically, the SSD is appealing as the brushed metal heat spreader adds a slice of style that many competitors lack.

Underneath the optional heat spreader lies the heart of the device, the Realtek RTS5763DL. This controller is a DRAMless solution from the company that is paired with four of Micron’s 64L TLC NAND flash packages on the 1TB model, the one we reviewed.

Current page: A Not So Extreme NVMe SSD