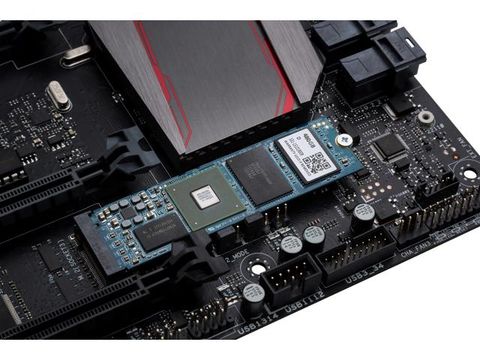 Due to the way flash prices scale, the Apacer Z280 240GB is more expensive in dollars-per-gigabyte compared to the 480GB model. The drive still delivers an exceptional amount of performance at a low cost and outperforms all of the TLC-based products on the market.

Apacer began building system memory in 1997. Many of its original products were destined for OEM and ODM markets, so you probably owned them even without knowing it. The company was at the forefront of building SSDs for industry customers before the consumer SSD market even formed. In recent years, Apacer has shipped SSDs over the APAC region, but now the company is ready to tackle the most congested SSD market in the world.

For the most part, the Apacer Z280 is a cookie cutter Phison PS5007-E7 M.2 2280 drive that uses the reference design and off-the-shelf firmware like some of the other products we've tested. From a reviewers point of view, the Z280 isn't all that exciting. We have several SSDs with matching specifications and abilities. It's not until you find the drive on Newegg with a low price point that the numbers start to come together. Surprisingly, the Z280 sells for TLC prices, but it uses Toshiba 15nm MLC flash.

The Phison E7 controller picked up speed in late 2016. A recent firmware update increased performance and SSD manufacturers took notice. After Phison released the new firmware, we've seen several companies demo E7-based products with unique designs, mostly in the add-in card form factor. The reference-design M.2 2280 with 15nm MLC flash is still a powerful combination for most users. The Apacer Z280 isn't a pure workstation product, but it does provide a powerful option at a low price point.

The drive faces stiff competition and adds to the clutter in the NVMe market, which is quickly being dominated by E7-based products. The increase in the number of E7 products stems from two factors. The E7 is a good controller for Toshiba NAND and delivers better-than-acceptable performance. But just as important, there is a lack of high-performance Silicon Motion, Inc. SM2260-based SSDs. SMI put significant resources into optimizing its SM2260 controller for IMFT (Intel Micron Flash Technology) 3D NAND. However, the IMFT 3D, in both TLC and MLC forms, doesn't perform as well as Toshiba's 15nm MLC when the SATA bottleneck isn't masking the results.

Apacer brought the Z280 series to market in two capacities of 480GB and 240GB. Some of the other companies brought the E7 M.2 2280 reference design to market in 120GB as well, but Apacer stuck with the two heftier capacities. We don't mind Apacer omitting the lower capacity point; the price difference between the 120GB and the 240GB E7 products is so small it only makes sense to purchase the larger, and faster, model.

Both capacities use the M.2 2280 form factor and use both sides of the printed circuit board for surface mount components. The double-sided component layout is an issue on some Lenovo X1 Carbon Ultrabooks, and possibly other ultra-thin products. This is an issue we've warned users about since we began testing M.2 drives. We've seen some negative user reviews on Amazon about the issue with other E7-based M.2 SSDs. If you plan to use the Z280 in a notebook or Ultrabook, make sure other surface mount components on the motherboard do not obstruct the M.2's space.

We found both Apacer Z280 SSDs at Newegg. They are in stock and ready to ship at the time of writing, which is nice considering the ongoing NAND shortage. The Z280 480GB sells for $217.99 and the 240GB retails for $128.99. The Z280 retails for slightly more than the MyDigitalSSD BPX, which is the current E7 value leader with MLC flash.

Apacer backs the Z280 with a three-year warranty that is limited by the SSDs write endurance. The 240GB model covers 349 TBW (Terabytes Written), and Apacer warrantied the 480GB model for 698 TBW.

Apacer put together a simple but effective package for the Z280. There isn't enough space on the box to list the full specifications, but the company made use of the available space. Inside, we found the drive enclosed in a plastic case, but there isn't any paperwork.

Most users will have to order the Z280 online because Apacer doesn't have a distribution channel in the US for big box retailers. The company does have a US office that feeds North America with a steady supply of products. Many of those SSDs ship inside other products, like NAS units.

The two capacities look identical with NAND density being the only differentiator. The Z280 is a double-sided design. The Phison PS5007-E7 is as close to the center of the board as it can be with four NAND packages (two on each side) and a single DDR3 DRAM package.