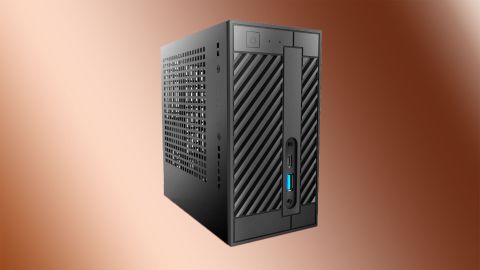 A combination of great efficiency, storage, and HDMI 2.0 opens the DeskMini to multiple end-user markets. But its lack of rear-panel connectors and somewhat high noise under heavy loads limits its appeal for some of those markets at the same time. If you find its limitations surmountable, it's a great compact computing solution.

Most of us can think of a few places where a tiny PC might come in handy. The first AMD-based Mini STX (a tiny 147x140mm motherboard form factor that supports socketed CPUs) desktop from ASRock, the DeskMini A300 offers users a combination of AM4 (Ryzen and presumably Athlon) processor support and relatively expansive storage in a reasonably priced package (about $140 / £151). Our biggest problem is figuring out which of those many places we’d like to put a compact PC would be best for this potentially fairly versatile AMD-based model.

Barebones PCs go back as far as any of us have been involved in the business. The combination of case, power supply, and motherboard was once used by discount merchants to foist their cheapest hardware upon value-seeking neophytes. Barebones systems eventually grew to encompass custom-designed high-end configurations, but the basic definition remains: You’ll have to pick your own processor, memory, and storage.

Roughly the size of a full-sized power supply, the DeskMini’s uncanny resemblance to a point of sale (POS) terminal boils down its shape, front-panel design, and mini VESA mount. The hardware gets a little more interesting, as there are no legacy serial or parallel ports for those old security dongles often required in the POS market. Builders instead get support for AMD’s AM4 CPUs up to 65W, along with whatever onboard graphics and memory support these CPUs provide. Of course, there being no room for a dedicated graphics card will cut down your CPU options quite a bit. Details on what's supported can be found in the specs table below.

ASRock’s official dimensions don’t include the affixed security tabs, so our measurements differ from theirs. Another exception is that you may be seeing the price for the Wi-Fi version (A300W), since the more-basic version we tested wasn’t in stock at the time of this writing. The Wi-Fi version includes an Intel AC-3168 Wi-Fi module and installation hardware that the builder must install themselves, and likely adds $10 to the retail price.

Designed to lay either on its bottom or right side, the DeskMini A300 has only two USB ports on its front (one Type-C at 5Gb/s) and two on is back (one USB 2.0). The front panel also has the case’s only two audio jacks, headphone and microphone, while the back adds DisplayPort 1.2, HDMI 2.0, and a WUXGA-compliant analog video connection. An RJ-45 for Gigabit Ethernet, a power jack for the 19V adapter, a Kensington Lock slot, and two security cable tabs are also on the back, while the previously-mentioned mini VESA mount is found on its right panel.

ASRock says that its included CPU cooler is optional, but with only 46mm of mounting space (we measured 48mm with our CPU installed), alternatives are limited. Every kit we’ve seen has included this option, which has a 70x15mm fan with raised corners that extend frame depth to 20mm. Other system-specific small parts include four self-adhesive rubber feet that are sliced around the edges to peel away from the scrap and backing, to be fit on recesses on either of the two supported sides, and two SATA cables with special notebook-style motherboard ends.