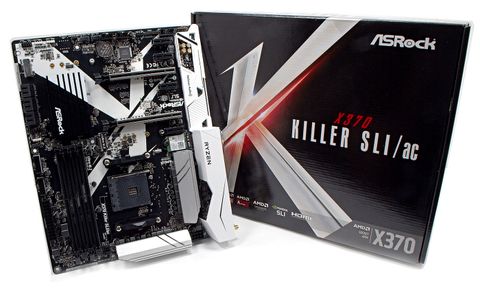 The ASRock X370 Killer SLI/ac inherits a lot of this section from its brother, the ASRock X370 Gaming K4, due to similar component choices and placement. At idle, the Killer burns 3% more power than our efficiency king, and both load conditions continue a similar trend by slightly lagging the leader but edging out both the MSI and Biostar samples. Unfortunately, full system stress is sometimes an artifact of sample times and Furmark lining up just right with Prime95. Overall, a 2nd place power win is impressive for this Killer.

Temperatures follow suit, and utilizing the Noctua U12 shows better performance compared to the Biostar and MSI Krait. The ASRock X370 Gaming K4 benefits here by using the monstrous Noctua dual fan product (in that review, we used the NH-D15 SE-AM4 cooler from Noctua), but regardless, either heatsink and motherboard combo work well in this chassis.

[*For MSI X370 Krait we observed that the sensors were tracking differently than with previous boards, so we had to reverse the nameing convention of the CPU thermal sensors. CPU Diode1 appears to track with other Ryzen 1700X installations.]

After scrutinizing our data, it’s unfortunate to see the ASRock X370 Killer SLI/ac lagging by 3% compared to the average in all metrics except applications. On the bright side, though, the odds are not stacked in its favor with the introduction of the 4K monitor and graphical hiccups on the synthetic tests. We believe this product would have performed similar to the ASRock X370 Gaming K4, putting this board into the middle of the pack.

This Ryzen 7 1700X has been a complete buzzkill in the silicon lottery, but it has proven to be fairly consistent across samples regarding both voltage and frequency. Putting in my standard settings (as seen in the UEFI sections on page 2), this sample reached a stable overclock of 3.875 GHz for an overnight run of Prime95 while running at 1.3875V. Granted, the Noctua has shown that it runs really hot under this much stress; but the system was stable and did not show signs of giving up during the extended torture test.

Our main take away from overclocking, though, comes in the memory department. As much as I hate overclocking memory, due diligence pays off.  Starting with UEFI P2.40 enables me to run the standard DDR4-2400MHz for only the G.Skill Trident-Z memory kit when fully populated. Removing two sticks grants me 2933 MHz speeds, but 3200 MHz just wasn’t stable. And the HyperX Predator kits were complete letdowns, not letting me run any configurations above 2133 MHz.

Determined to succeed, updating to P2.5 was the cat’s pajamas. Instantly, half populated HyperX Predator DIMMs ran similarly to the G.Skill kits with stability achievable at DDR4-2933. The Predator configuration did not run above 2666 MHz with DIMM slots fully populated, but this is a drastic improvement from where we were at launch day. Switching back over to Trident-Z, fully populated DDR4-3200 only produced errors during moderate to heavy usage. Fully populated DDR4-2933 is where we settled, and we can now sleep soundly at night knowing that memory seems to be fixed on at least this AMD platform.

The ASRock X370 Gaming K4 sets the bar for all metrics here, representing a near perfect average representation for value, performance, and price at the time of publication. For the Killer SLI/ac, performance has been back and forth. But lagging behind the average by nearly 2% does not completely invalidate a product’s existence. It only proves that testing methodologies, software version releases, and the current phase of the moon can impact results both in favor and against any particular sample. Heavily in favor for the Killer though, is price. Shaving $10 off the Gaming K4 makes this sample more appealing, while providing a slightly larger feature set and still delivering similar fundamental designs.

The ASRock X370 Killer SLI/ac at first felt like an attempt to repackage a product with a different skin. However, this repackaging grants us WiFi, similar overclocks, and average efficiency, while dolling out value comparable to our other Recommended award winner, the MSI X370 Krait Gaming.  It is only fitting that we do the same here, especially when the ASRock X370 Killer SLI/ac ditches the red and black and gives customers what they need.