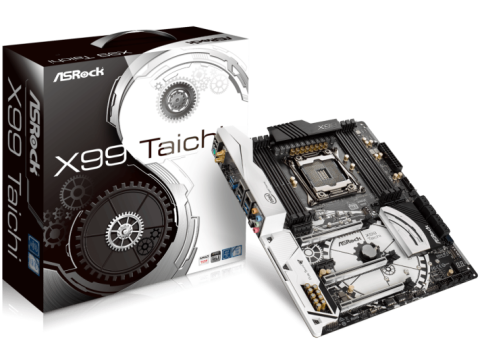 The X99 Taichi is a superbly well-rounded motherboard for entry-level pricing. Simply put, it's one of the best X99 boards you can buy under $300.

As a Tom's Hardware reviewer, I'm incredibly fortunate to get my hands on tech I otherwise wouldn't be able see (the X99 Godlike motherboard and EK custom loop kits come to mind). But as a pragmatic enthusiast, I realize that some of these components are well outside the reach of the majority of the readers here. So I get a different, yet longer-lasting thrill when I get to review motherboards or parts that I could actually afford to use in my personal builds.

Nevertheless, affordable parts are accompanied by a mix of excitement about new upgrades and foreboding that you'll be let down by too many corners cut to hit an adequately low price point. The arrival of ASRock's X99 Taichi elicited these thoughts.

ASRock's motherboards have long been on our Best Of lists through a combination of live human sacrifice and voodoo magic (also known as offering quality products at very competitive prices). The company's boards consistently hit that value sweet spot by offering the most important features consumers want while cutting out the gizmos most people will never use. Going by the spec sheet alone, the Taichi hits all the important targets. Time to find out if it's a paper tiger or sleeping dragon.

The Taichi's design plays off its name, with a yin and yang, black-and-white gear motif. Apart from the graphics, the layout is completely ordinary. The 12-phase power regulation is under a good-sized heatsink with premium chokes. The 8-pin power input is adequate for even moderately high overclocks. The PCB is eight layers, measures 1.6mm thick, and feels pleasantly stiff for hanging large coolers off the CPU.

Two fan headers specifically labeled for CPU coolers and water pumps are smartly placed in the top right corner, a convenient location for top and front mounted radiators as well as double fan air coolers. The remaining three are spaced along the middle of the board, one on the front edge and the other two at the bottom corners of the CPU socket. These will be obstructed by any air cooler large enough to handle the 2011-3 platform. If you plan to go big air with the Taichi and need to use all the fan headers, be sure to install and connect the motherboard and fans in the case before installing the CPU cooler. We'd rather ASRock move one of these headers toward the bottom right corner of the board for lower front intake fans. The remaining header would do better for rear exhaust fans below the RAM slots, at the top left corner, or even squeezed between the RAM and rear I/O shield.

Fan header operation is flawless even if the layout leaves something to be desired. All fan headers support both PWM and voltage fan control. The pump header has both fan and pump specific settings. Every header can also be set to its own speed curve. The main CPU fan also supports speed up and slow down delays to keep the fan from constantly changing speeds for momentary CPU temperature spikes and dips. The board does enforce an 80°C critical temperature, forcing both CPU headers to 100% duty on hot CPUs. The 80°C limit affects all fan headers tied to the CPU.  Even the system fan headers can be told to monitor the CPU temp instead of the motherboard temp.

The Taichi's expansion card area is another example of ASRock's modus operandi of removing the superfluous without handicapping core features. The Taichi opts for simple 3-way GPU support. The primary 3.0 x16 slot is in the second position, allowing plenty of clearance between RAM modules and GPU backplates. ASRock doesn't waste money on throwaway wiring or components for the third or sixth slots since they will be covered by GPU coolers most the time. The final x16 slot (only wired for x8 bandwidth) is at the bottom (seventh) position. Lane splitting supports x16/x16 and /x16/x8/x8 for 40-lane CPUs and x16/x8 and x8/x8/x8 for 28-lane versions.

The 2.0 x1 slot up top is out of the way of any graphics cards, and RAM clearance is hardly a worry since x1 cards typically don't have backplates. A second 2.0 x1 slot is in fourth position between two x16 slots for those who really need it. While technically this makes breathing room difficult for air-cooled SLI/CF setups, the number of consumers using two GPUs and two x1 cards is incredibly low. In contrast, the Taichi can handle two triple-slot GPUs just fine while still leaving the bottom edge connectors available, which is a much more likely scenario.

The pièce de résistance of the PCIe configuration is storage. The Taichi offers two M.2 slots, one above the top graphics slot away from heat, the other just below the chipset heatsink on the far side of the sixth expansion slot. Both are capable of 3.0 x4 bandwidth and neither share PCIe lanes with expansion cards. The top slot defaults to SATA mode with a 28-lane CPU and can handle up to 80mm modules, while the bottom socket always supports PCIe mode and can fit up to 110mm modules. The only tradeoff is that both M.2 sockets share with regular SATA ports, not SATA Express, meaning both M.2 slots operate at 6Gb/s in SATA mode and not 10Gb/s. The Taichi could actually run two PCIe M.2 drives and a SATA Express drive simultaneously, were you so inclined. Eight SATA ports sit along the front edge of the board with the other two mounted vertically between the RAM slots and chipset heatsink.

The rear I/O panel is feature packed without feeling over stuffed. Keyboards, mice, and peripherals are handled by a PS/2 jack, three USB 2.0 ports, three 3.0 5Gb/s ports, and two USB 3.1 10Gb/s ports (one type-A, one type-C). The Taichi also boasts three networking interfaces. An Intel 3160 wireless combo card handles Bluetooth 4.0 and AC Wi-Fi. The 1x1 card is limited to a relatively slow 433Mb/s, but that's unlikely to bottleneck most user ISP bandwidth. Dual Intel gigabit Ethernet controllers allow teaming. Most consumers won't need the second LAN port, but those looking for an inexpensive board for home server/router duties will appreciate it.

The audio ports are your standard collection of five 3.5mm analog jacks and one S/PDIF for digital audio. In addition to Realtek's 1150 codec and DTS-Connect support, the Taichi also incorporates a Texas Instruments NE5532 amp capable of driving 600Ω headphones. Like most motherboard manufacturers now, ASRock separates and shields the audio circuitry on the PCB as part of its Purity Sound 3 package. As a cherry on top, ASRock throws in a CLR CMOS button.

The rest of the headers are the typical mix. A USB 3.0 header is along the front edge above the graphics slot. Along the bottom are two USB 2.0 headers, a serial port, TPM, front panel header, and HD audio tucked in the back corner. Two socketed firmware chips with a selector switch complete the ensemble.

The Taichi comes in premium packaging with the board wrapped in high density foam instead of just a static bag. However, premium is not the word to describe the box contents. While the rear I/O plate is nicely labeled, it has no padding, and the metal doesn't even span the whole back (half the gaps between the ports are only covered by the label sticker. The included Wi-Fi antennas are fixed, which doesn't always translate to good reception when stuck behind the metal sheet of the case. A wired antenna, like that found on ASRock's Extreme6, or almost any MSI or Gigabyte board, would have been a better option. Three hard SLI bridges are included, surprisingly including one high-bandwidth bridge. Four SATA cables (two angled connectors, two straight), instruction manual, and driver disc make up the rest.