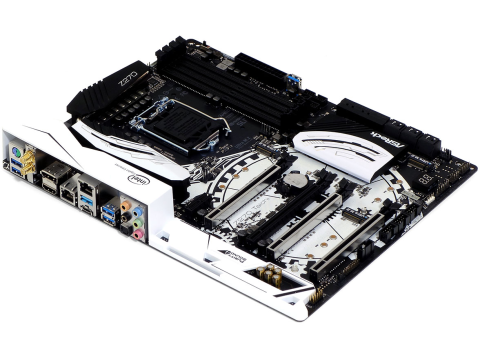 Since we’re treating automatic overclocking as a form of cheating and disabling it, the perfect benchmark set would be a very boring benchmark set. We’ve nearly accomplished that in both 3D Mark and PCMark.

Default CPU and DRAM settings haven’t cancelled out all variability though, as many companies play with advanced memory settings to achieve either improved performance or additional stability/compatibility. ASRock’s memory bandwidth comes out slightly slower as a result, and that slightly impacts the Z270 Taichi’s performance in Sandra Cryptography.

The ROG Strix had a hiccup at our lower Ashes setting, and after repeating that result, we decided it was too small to concern us. Meanwhile, the Z270 Taichi is close to par.

The Z270 Taichi’s gaming performance is nearly par with its competitors, except when one of its competitors is held back. Nahimic audio software hampers Z270 Gaming M5 frame rate in Talos, as detailed here.

Through trivial wins and losses, the Z270 Taichi comes out about 1.5% behind the group average in timed application performance.

The Z270 Taichi has a wireless controller, but that doesn’t explain why it consumes more power than Strix Z270E Gaming which also has one. Conversely, relatively high core voltage under load made the Z270X-Gaming 7 the greatest consumer, raising the Z270 Taichi to fourth place in miserliness.

The MSI Z270 Gaming M5 used a slight above-reference BCLK to exceed 4.8 GHz, but that doesn’t matter since we only test in 1 MHz BCLK increments. The Z270 Taichi on the other hand came out below competitors, not due to a BCLK deficiency, but to an actual inability to run infinitely at 48x 100 MHz in an AVX-enabled eight-core load. The 4794 MHz came from dialing the multiplier back to 47x and increasing the BCLK to 102 MHz.

ASRock hasn’t locked in the Z270 Taichi’s reduced price, instead choosing to use temporary discounts to put an impetus on buyers to purchase “now.” Since we cannot know how large that discount will be from week to week, we had to use its $220 non-discounted price in our value chart.

For around $20 (to $50, depending on discounts) more than the Z270 Taichi, the Z270X-Gaming 7 adds a Thunderbolt 3 controller. It doesn’t have a Wi-Fi controller though. The Aorus board is probably worth at least the $20 basic difference, but different days yield different results.

The Maximus IX Hero was chosen as our DRAM test bench, but can’t match the Z270 Taichi’s pair of network controllers. The Hero even has a gap where the Wi-Fi card should have been.

The Strix Z270E Gaming has a better Wi-Fi controller while costing $20 less than the Z270 Taichi’s list price. Ouch. While this could be the perfect excuse for ASRock to ditch the temporary discounts and simply lower its list price, we can still see that the Z270 Taichi has an extra network controller. Plus, the Taichi is the only board in today’s comparison to offer the flexibility of x8/x4/x4 slot mode from the CPU controller, or x8/x4/x8 slots from the CPU and PCH controllers, or even x8/x4/x4/x4 mode. And the Z270 Taichi even does this while giving users three PCIe x4 M.2 slots. These options translate into approximate value parity to a product that has already achieved our stamp of approval.

ASRock dodged a bullet in the Z270 Taichi by relying on temporary discounts rather than a low list price, but the bullet it dodged was a bullet point for exceptional value. Instead of getting our more coveted Recommended award based on its frequently discounted price, it instead gets the same level of award as boards that have already shown similar value to its regular price. Anyone who’s read this review simply gets a wink and a nod in advance, for when they mention whatever discount they’re able to use.