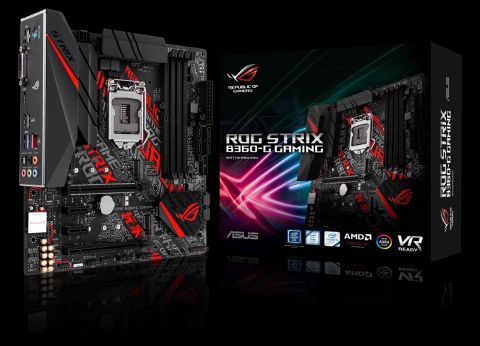 While a $10 price difference might not be enough to sway most enthusiast, it’s enough to put the Strix B360-G Gaming in a lackluster value position. Your choice will more likely involve counting ports and other connectors, as it should.

The Strix B360-G Gaming shares little if anything in design with its Z370 sibling. That may be due to the integrated USB 3.1 Gen2 support of the newer H370 and B360 chipsets, which no longer require the board to have a spot for an additional controller integrated circuit (IC), yet we’ve seen other manufacturers at least share circuit boards between various models and exclude built-in features via the transition. Asus wasn’t having any of that in this ROG-series board, though.

The Strix B360-G loses only six of the parent (Z370) chipset’s 30 HSIO lanes, but it only allows 12 of the remaining 24 lanes to be directed to PCIe. That needn’t be a problem for any Micro ATX board, since the CPU’s separate PCIe controller feeds the graphics card. We count four lanes for its bottom x16-length PCIe slot, one more lane for the lower PCIe x1 slots, four lanes for the primary M.2 adapter, and two lanes for the secondary M.2 adapter. Activating the upper x1 slot requires kicking the four-lane bottom slot down to x2 mode, but we can’t imagine any gamers using the x1 slot that’s normally covered by the cooler of their graphics card.

USB 2.0 doesn’t require HSIO access, but is still useful for keyboards and mice, so Asus includes two of those on the rear I/O panel, along with a PS/2 port for people who prefer true legacy peripherals. The two USB 3.1 Gen1 (aka USB 3.0) and two USB 3.1 Gen2 (10Gb/s) ports each get one HSIO, and the Intel network circuitry also requires an HSIO, which brings the I/O panel to five of the remaining 13 available HSIO resources. And the rest of the panel is filled out with DVI-D and HDMI 1.4b for the CPU’s integrated GPU, along with five analog stereo jacks and a digital optical S/PDIF output.

Internally we find six SATA ports and a two-port USB 3.0 header consuming the remaining eight HSIO lanes. So far, the only snag we’ve found is that sharing between the upper PCIe x1 slot and four-lane x16-length bottom slot isn’t documented, either within the manual or on the Strix B360-G Gaming’s web page.

The upper PCIe x16 slot has reinforcement pins at its corners to help prevent a graphics card from tearing the slot from the motherboard during rough handling of the finished build, but the lower x16-length slot doesn’t. The lower slot’s position would require a five-slot case for the builder to install a graphics card with a double-slot cooler, but since it has only four pathways, most builders probably won’t be putting a heavy graphics card there anyway. So the “Crossfire” notion is more theoretical than practical.

Should you choose to put a dual-slot card in the bottom slot anyway, you’ll be happy to see that Asus moved the USB 3.0 internal header up the front edge of the board to place it above the top card, where the stiff cable can’t interfere with anything mounted onto the board. The four perpendicular-facing SATA ports are above that for similar consideration, and the bottom two SATA ports face forward to tuck those cables under the leading edge of any installed cards.

Integrating the I/O shield onto the I/O panel leaves Asus even fewer components for the Strix B360-G Gaming’s installation kit. You get two SATA cables, a pack of cable ties, and M.2 mounting screws. That's it for in-box hardware accessories, but buyers also get a full printed manual, driver and application disc, sticker pack, and a souvenir door card.