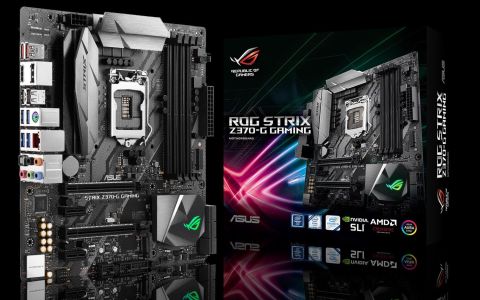 The best Z370 board we’ve tested for the Micro-ATX form factor, the ROG Strix Z370-G Gaming has sufficient features and overclocking capabilities to meet our performance and value goals. But the need for additional voltage regulator cooling stops it short of broader recommendation.

The second Micro-ATX motherboard we’ve tested for Coffee Lake CPU overclocking, the Asus ROG Strix Z370-G Gaming adds SLI capability and improved voltage regulator cooling. Yet, while the same hardware that enables SLI also allows the board to address PCIe x8 storage adapters via CPU lanes, the improved voltage regulator simply wasn’t improved enough to impress in all of our testing. A good value for its enhanced features, we’re slightly disappointed that Core i7-8700K users are forced to add their own fan to the voltage regulator simply to hold a full CPU load over extended periods—even at stock frequencies.

Asus introduced ROG as a premium product line, but the Strix series redefined it with a lower price floor. The focus on things like SLI and overclocking capability remains, along with some semblance of RGB control for show system builders. Asus' ROG Strix Z370-E Gaming has become a great example of that effort since its relatively recent price drop, and we’re happy to see the Micro-ATX-sized Z370-G Gaming brings many of its larger sibling’s features to the table.

Even though ATX fanatics constantly berate the Micro-ATX form factor due to a 20-year-old association with low-cost builds, enthusiasts' board designs prove that there’s no reason for these boards to represent a reduction in features compared to ATX. Micro-ATX boards are still 9.6-inches deep, so you get all the space needed for a big voltage regulator (without resorting to riser boards), plus the four DIMMs that Mini-ITX guys often miss out on. Asus even kits the mid-sized Z370-G Gaming with the 867Mb/s Wi-Fi module seen on the board's ATX sibling.

Shoppers who opt for the Micro-ATX version over ATX should theoretically lose only three expansion slots and the few devices that reside in front of those slots. In practice, Asus used a perpendicular slot to retain the same M.2 configuration of its larger boards but gave up completely on RGB LED headers. Onboard lighting moves from the I/O-connector internal cover ATX location, to the PCH sink's ROG logo on the Micro-ATX.

The Z370-G Gaming lacks DVI-D for onboard graphics, unlike its larger sibling, but features two USB 3.0 (aka USB 3.1 Gen1) ports, bringing the total to four. That sounds like a positive swap, considering hardly any performance users will need onboard graphics since the onboard graphics is still addressed by both HDMI and DisplayPort, plus passive HDMI to DVI adapters are cheap. Yet, for reasons we cannot fathom, Asus decided to use two Type-A ports for USB 3.1 Gen2 (10Gb/s), rather than include a Type-C port. Your guess as to why would be better than ours.

A top view shows two 4-pin CPU fan headers aft of the DIMM slots, two more 4-pin connectors at the upper-front and forward-bottom edges, a supposedly special water-pump-rated 4-pin fan header next to the RTC battery, oversized chokes for the CPU voltage regulator, a perpendicular M.2 slot near the center of the front edge and a regular M.2 slot below the second PCIe x16 slot. Asus does not document special amperage capabilities for the water pump header but does rate the CPU fan header at 1A.

A closer look at the Z370-G Gaming’s lower half reveals four ASM1480 two-lane PCIe switches between the two x16-length slots, an 80mm limit for the lower M.2 slot, three pairs of forward-facing SATA ports and a lower edge that includes front-panel audio, two USB 2.0 and one USB 3.0 front-panel headers, a temperature sensor and CLRTC pins, one of the five fan headers and a front-panel combo header that has a standard Intel configuration on the left side. The PCIe switches allow the board to switch from x16/x0 to x8/x8 PCIe lane configuration, the lower M.2 slot adds SATA module support by stealing the pathway from one of the forward-facing ports and the front-panel combo header adds PC speaker and 3-pin-space power LED pins to the right of the standard 9-pin group.

Large support pins on four corners protect both x16-length slots against connector tearing that might otherwise occur during rough handling of a complete build.

Even the lower-budget Strix series gets ROG bonuses, such as a door card, sticker kit, thermistor cable, cable tie pack and a coupon for CableMods.com. Buyers also get the traditional Asus printed manual, a driver and application disc, an I/O shield, four SATA cables (two with a right-angle end), a riser bracket to secure perpendicularly mounted M.2 drives up to 110mm in length, a fan bracket and a CPU installation tool that helps installers set the CPU down without damaging pins. The included fan bracket is designed to hold the builder’s choice of either a 40mm or 50mm fan above the voltage regulator.