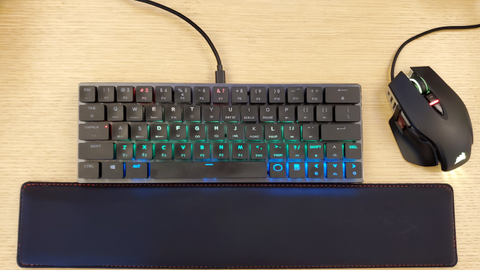 Cooler Master’s smallest (60%) wireless/wired mechanical keyboard strikes a contentious balance between form and function. But if you like flat caps and are willing to live with a few oddly placed keys for the benefit of extreme portability, it should serve you well.

For many of us, the primary point of a mechanical keyboard is to get away from the flat, cramped keys found on the average laptop. And that makes Cooler Master’s SK621 mechanical a particularly strange proposition. The 60% design is actually slightly smaller than the keyboard on my work laptop (a Dell Latitude 7490), and the chiclet-style keys are flat--or very nearly so. There is a very shallow scoop to the keys.

That said, as we noted in our review of the larger SK630 and SK650 models, the Cherry MX Low Profile RGB Linear (Red) switches, combined with the flat keys, take some getting used to. And on this smaller model, you’ll also have to deal with a narrow right Shift key, and a Delete key that gets shoved unceremoniously below the Enter key. Sacrifices must be made in the pursuit of keyboard compactness, but I’m not sure Cooler Master made all the right ones with this model.

As someone who travels a fair bit and loves mechanical keyboards, I’m no stranger to 60% keyboards. I’ve owned an Anne Pro keyboard with clickier blue-style switches and taller, scooped keycaps for well over a year. My primary issues with that keyboard are its lack of dedicated arrow keys, lack of an off switch, and easy-to-forget combos for controlling the lights and settings (it lacks any software). It also doesn’t ship with a travel bag, and at about 1.7 inches thick at the back, it’s not quite as portable as I’d like.

In many ways, Cooler Master’s SK621 improves on those issues. It has arrow keys, an off switch on the left side, and is only 1.1-inch thick at its thickest point at the rear. It also comes with a draw-string velvet pouch that’s serviceable, if not exactly luxurious. The inch-thick height and 11.5 x 4 (293 x 103 x 29.2mm) dimensions makes this keyboard far more portable than any mechanical I’ve used in the past.

The SK621 can be used either wirelessly via Bluetooth (you can save pairings for up to three devices) or wired via USB-C. Cooler Master includes a nearly six-foot-long (1.8m) braided cable. But if you’re planning on packing a shorter cable of your own for travel, just make sure the plastic around the USB plug isn’t too wide. The keyboard’s port is recessed, so some of my USB-C cables wouldn’t fit. Also in the box with the SK621 is a keycap puller and a small paper manual.

The low-profile Cherry switches support standard keycaps as well, so you could switch the flat keys out for something that feels more traditional. But that would add to the already fairly high price, and increase the thickness of the keyboard, making it less portable.

Overall, I like the look and feel of this keyboard a lot. The various lighting effects (which can be controlled either via keyboard shortcuts or software, more on that later) look good, and the build quality feels solid, with a rugged-feeling plastic bottom and a brushed-aluminum top plate. I’d like to see some flip-up feet to raise the keys at the back, but that’s not generally a feature of these small keyboards, and the overall design is wedge shaped, so the keys at the front are slightly lower than those at the back by default.

Here’s a look at the keyboard’s specs, along with those from the larger SK630 and SK650 models, direct from Cooler Master.

Every 60% keyboard is an exercise in compromise. My Anne Pro, for instance, lacks dedicated arrow keys--which I’ve found to be a huge pain point. That’s not a problem with the SK621, although they do get shoved below the Enter/Return key here. My main complaints about the SK621’s layout are the tiny right Shift key, which had me often accidentally hitting the up arrow and the fact that the Delete key is wedged between a couple of arrow keys, also below the Enter key.

Also, since this is a five-row keyboard, the Function row has been relegated to secondary FN access, inside the number row. This is also where you’ll find the Game Mode function for locking the Windows key, accessed by hitting the Function key (labeled with a Cooler Master Logo) and the (thankfully normal-sized) Backspace key.

There’s also the issue here of the flat chiclet-style keys and the linear red switches. Just as we said in our review of the SK630 and SK650, this combo isn’t for everyone. The flat keys make it harder to orient your fingers by feel, and the 1.2mm actuation point and 3.2mm key travel, while luxurious by most slim laptop standards, is shallower than on larger mechanical keyboards. Combined with the compact nature of the keyboard itself, this led to an immediate cramped typing feel, and a bit of finger fatigue after long periods of writing.

It did feel, though, like I was adjusting to the SK621’s typing experience after about a week of regular use. And after that week, my typing speed on the 10FastFingers typing test averaged 52 words per minute, down from my normal full-size mechanical typing speed of just above 60 words per minute. My error rate was also up to 9 percent, from my usual 3-5 percent.

It’s pretty much a given that you’re going to type slower and with more errors on a smaller keyboard, so I find this difference acceptable if you’re prioritizing portability over comfort and accuracy. But I’d still prefer a larger right Shift key. Trying to start a letter or proper name with a capital letter, only to have your cursor jump up to the previous line is just plain annoying.

I found the key layout and switch feel less of an issue when gaming than typing--at least in terms of feel--in part because I use a keyboard with MX Red switches when gaming at home. But if you’re serious about your gaming sessions and want to minimize those moments when you’re character dies because your fingers mashed the wrong key, you’re going to want to use a full-sized keyboard.

The same things we said about Cooler Master’s lighting in our review of the larger SK630 and SK650 holds true here. The SK621’s lighting is vivid, bright and versatile, with lots of color and effects presets, many of them dynamic rather than just static colors. Perhaps the most unique is the Equalizer setting, which has the keyboard light up in random colors in reaction to the music playing on your system. Note, though, that this setting only works when the keyboard is plugged in via USB.

Cooler Master provides some solid keyboard control software should you choose to install it (though you’ll have to install the right version, as we’ll explain shortly). But you can actually change most of the keyboard’s settings and RGB lighting through keyboard combos, which the company calls “On-the-fly Shortcuts.” You can find the full list below, direct from the company’s press materials.

As you can see, the on-keyboard control options are quite substantial--a nice feature for a keyboard that’s designed to be used on the go, likely with various PCs and other computing devices. Even better: Cooler Master does a good job of actually labeling the keys to call out the shortcuts so you don’t have to remember them all to use them. This is one of the major problems I have with the Anne Pro--it doesn’t have software, and I always have to look up key combos online in order to make any changes to the settings or pair it with a new device.

Should you prefer a software interface to dial in precise color setups or detailed Macros, you can download Cooler Master’s Portal software. Just note that, even though this is a brand-new keyboard, you need to use V1.01 of the software, not the seemingly newer V1.5.7. Cooler Master does call out which software supports which products on its download page, but it’s still confusing to have two versions of software with the same name that support different subsets of devices. I initially grabbed the wrong one and spent about a half hour trying to figure out why the software wouldn’t recognize the keyboard.

With that out of the way (and version 1.1 installed), the software recognized the SK621 right away once it was plugged in via USB, and started installing firmware updates. Once everything was up to date, I was greeted by a pleasingly simple and intuitive interface for wireless settings (controlling when the lighting turns off and how bright it gets to balance bling and battery life; LED (there are about 20 preset lighting effects, plus the ability to create your own); Macro and Key Map sections (which are pretty self-explanatory); and Profiles (which lets you import and export, as well as save your profiles on the device).

If you like the feel of flat, chiclet-style keys and prioritize small size and portability over typing comfort, speed and accuracy,  the Cooler Master SK621 is well worth considering. Its layout makes some compromises that aren’t exactly easy to get used to (I’m looking at you, tiny right Shift key).And if possible you should try the feel of Cherry’s MX Low Profile red switches before buying (or make sure where you buy from has a good return policy).

I wasn’t a huge fan of the SK621’s flat keys and cramped layout at first. But after about a week of regular use, I found myself getting used to the feel of the keys and the switch, and typing about 13 percent slower than on my full-sized mechanical keyboard, which takes up about three times as much desk space. I still much prefer a full-size keyboard (and contoured keycaps) for my day-to-day writing tasks. But when traveling, I could certainly see tossing the Cooler Master SK621 in my bag and using it in lieu of my laptop keyboard and its shallow travel--and lack of RGBs.