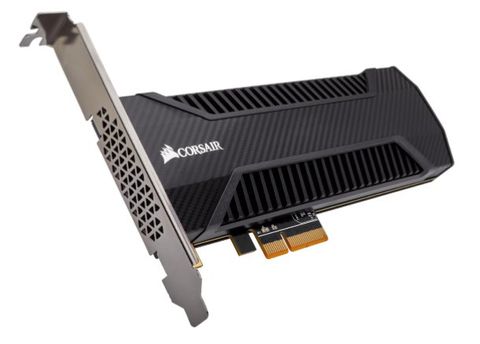 We stuffed the comparison charts with just about every consumer 1TB NVMe SSD available. The Galax HOF PCI-E 1TB with the Phison E7 controller is the rarest of the group, but it's also the coolest-looking drive. Even when you can find it, the +$1000 USD price tag is a deterrent. It also makes the Corsair NX500 800GB look like a value. The Galax drive shipped with older firmware, and the Corsair SSD ships with the latest version.

We wanted to include the Intel SSD 750 800GB but ran out of room in the charts. The 800GB version of Intel's flagship consumer SSD performs much like the 1.2TB model.

Toshiba/OCZ contributes the RD400. We used the add-in card for these tests instead of the bare RD400A M.2 drive. The add-in card version uses a thick thermal pad between the M.2 drive and the adapter to aid cooling. It helps a little, but we still ran into thermal throttling issues during the sequential write test.

The NX500 performs very well during the sequential write test. The drive trails the two Samsung 960 Series products through most of the tests but delivers nearly 1,500 MB/s at QD2.

The Neutron is the first Phison E7-based NVMe SSD to surpass 10,000 random read IOPS at QD1. The SSD scales well at low queue depths and experiences a large jump between QD2 and QD4. This is where we want to see aggressive performance with an enthusiast-class SSD. A custom NVMe driver could increase performance, but Phison has yet to release an optimized driver that wrings extra performance from the hardware.

The new firmware paired with the upgraded heatsink allows the NX500 to perform much better than the Galax SSD during the sequential workload. The NX500 scales well to QD32. The drive plateaus at that point, but it still holds steady at 1,500 MB/s.

The NX500 starts out strong on the left side of the sequential steady-state chart during the heavy read workload, but it trails the other drives as we increase the write percentage. Instead of providing a slow uptick beyond 50% reads and writes, performance continues to degrade until we get to 100% steady-state writes.

The Corsair Neutron NX500's additional overprovisioning prevents the drive from reaching a deep steady state during our one-hour QD32 random write test. After examining the results, we didn't see a need to run a longer test. On the second chart, which measures the last 100 seconds of the test, we see the drive drop sporadically to very low levels. That's not a favorable result, but it's not the worst we've ever tested.

Admittedly, all the drives in this group appear to be similar with daily-use applications. That's the way SSDs work with light-use software. The biggest difference comes in the Photoshop Heavy test. We measured a five-second difference in the six-minute test.

We see a sizable difference between SATA and NVMe during most of the tests, but it's difficult to tell them apart during the subtests.

Over time, though, a few seconds here and there add up. In this chart, we combine the results and present the average performance as a throughput score. The Corsair NX500 800GB compares best against the Intel SSD 750 1.2TB and the Samsung 960 EVO 1TB. The Samsung costs significantly less, and the Intel costs significantly more. The Samsung can fit in a notebook, though, because it comes in a tiny M.2 form factor.

I honestly expected the Corsair Neutron NX500 to deliver similar results to the Intel SSD 750 and Samsung 960 Pro during the more difficult workloads. The additional overprovisioning should allow the drive to move up a tier or two, but that wasn't the case. The drive is much more consistent than the Galax HOF PCI-E with the same controller, but it's not in the same league as the 960 Pro and SSD 750.

There are not any latency issues that we can see, and that's a good thing. The Corsair NX500 places third during heavy workloads with only a moderate amount of time to recover. The NX500 is knocking on the door, but it's not completely where it should be.

The low-cost 1TB SSDs are cheap for a reason. TLC NAND, both planar and 3D, often suffers in latency or completion time measurements. These products are excellent for normal desktop tasks, but you shouldn't take a kitchen knife to a renaissance festival sword fight. The Samsung 960 EVO 1TB is the sole exception. Even the upcoming Toshiba XG5 with BiCS FLASH (3D TLC) shows signs of weakness during very heavy workloads.

The NX500 800GB is a solid drive with fairly consistent performance, but it has intense competition from some existing MLC competitors.