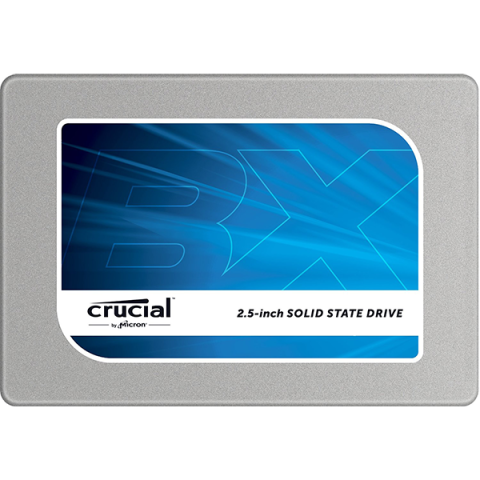 Encryption hasn't taken off for consumers and we've found that price often matters more than advanced features or even the best performance available. First and foremost users want reliability, then low price and finally acceptable performance. SSDs by nature are faster than spinning disks so performance is covered. Crucial made it possible to check the boxes next to reliability and price making the BX100 a solid value for consumers.

Crucial's SSD portfolio looks a lot like what you find in the video card market. It goes beyond the standard low-cost, mid-range and flagship tiers used by most companies. With several products available and two controllers offered, the lines often blur.

The company's new MX200 and BX100 make the 1TB capacity class mainstream-accessible. Its MX200 would naturally replace the eight-month-old MX100, but Crucial tells us the current product line is only expanding and not replacing existing models. With that said, the BX100 we're testing today gives Crucial a product to compete in the hard disk replacement category. This classification is a polite way of addressing the lowest-priced SSDs on the market. Crucial wants to tempt buyers into purchasing an SSD instead of a hard drive.

In order to hit the price point it's hitting, Crucial taps Silicon Motion's SM2246EN controller. Crucial and SanDisk were the first flash fabs to adopt the SM2246EN. But several third-party vendors already have low-cost SSDs with the processor.

Crucial is aware that its competition has nearly identical products. The BX100 launch became a favorable time for the company to release its first SSD Toolbox utility. Crucial calls the browser-based software Storage Executive, and it offers all of the usual toolbox tricks like secure erase, firmware updates, SMART monitoring and a PSID reset tool (for hardware encryption, when available).

To attract a wider range of customers, Crucial launched the BX100 in four capacities. The series starts at just $70 for the 120GB model, which is an attractive price point for notebook users that mainly surf the Web. At the other end of the scale, gamers on a limited budget can fit all of their favorite titles on the higher-capacity models.

All four products read sequential data at up to 535 MB/s. The Silicon Motion SM2246EN four-channel controller has a year-long history of delivering exceptional read performance in other products. But with SSDs today, your money is spent on write performance. The higher-capacity models deliver 450 MB/s sequential write speeds, which is around 100 MB/s lower than most performance-oriented SSDs. The two lowest-capacity drives are slower still, topping out at 370 MB/s for the 250GB version and 185 MB/s for the 120GB.

That smallest BX100 also takes hits to random performance, topping out at 43,000 random write IOPS, while the three larger sizes push up to 70,000 IOPS. Random read IOPS are more steady. The lowest-capacity drive is rated at 87,000 IOPS and the larger ones reach up to 90,000.

The BX100 doesn't include many of the technologies we expect from new SSDs these days. Hardware encryption is absent, as is DevSlp support. Buyers in this price range tend not to worry much about FDE, but any capability able to extend notebook battery life would be nice. Fortunately, the four-channel controller sips power, so the feature isn't missed much.

You get a 9.5mm adapter in the retail package. However, its real highlight is Crucial's Storage Executive software. The utility doesn't physically come from the box, but the BX100 family works with this downloadable software that adds extra value.