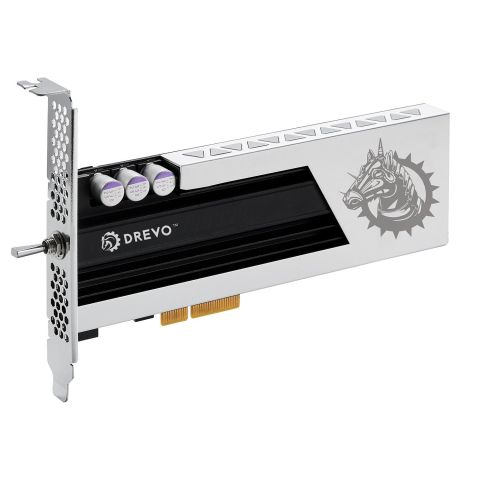 The Drevo Ares is an interesting SSD. Drevo intended the Ares to be a high-performance SSD, but SMI couldn't deliver enough performance with this controller to make it to premium status. The drive definitely isn't a performance leader, but it looks great. It's up to you to decide if it's worth the investment.

Drevo's SSDs are becoming more popular on Amazon. The company sells quite a few low-cost SSDs and keyboards, but it hasn't submitted products for reviewer scrutiny until recently. At the time of writing, the company lists six internal and two portable SSDs. With prices starting at just $38.99 for a 60GB internal SSD, there is a lot of excitement surrounding the company. The low-cost sub-$40 SSD even has over 200 positive user reviews.

The Drevo Ares is the company's first NVMe SSD, but it uses a familiar design that we've tested before with the Tigo G5 PCIe SSD from Hong Kong. There is one significant difference between the two products. Tigo sells the G5 PCIe SSD in several capacities that range from 256GB to 2TB, but the Drevo Ares only comes in 256GB.

We don't expect too much in the performance department from the Drevo Ares. The company built the drive around the SMI SM2260 dual-core controller paired with Intel/Micron Flash Technology (IMFT) 256Gbit 3D MLC NAND. For the most part, all the SM2260 controllers paired with any flavor of Micron's first-generation 3D NAND have been a disappointment. Micron, under the Ballistix brand, planned to release an M.2 2280 consumer product with the same components as the Ares, but the company canceled it two weeks before the official launch.

Intel's 600p NVMe SSD took the poor controller and NAND performance in stride. Intel simply positioned the 600p as the first entry-level NVMe SSD and sold them by the handful. The Drevo Ares sells for only a few dollars more than the 600p 256GB. The performance is nearly the same even though the Ares features 2-bit per cell (MLC) rather than 3-bit per cell (TLC) NAND flash. The extra $20 spent gains you a hefty endurance increase, a good looking heatsink, and a few blue LEDs to light up your computer case.

Drevo currently only plans to release a 256GB Ares model, but it hasn't closed the door on other capacities. The company says it might develop other models if there is a market demand for larger entry-level NVMe drives.

The large heat sink prevents the drive from thermal throttling.  If you feel like slowing the drive down, Drevo mounted a 3-way selector switch that will do it for you. It allows you to select three different performance modes. We recommend keeping the drive on its highest setting and never looking back.

In high-performance mode, the Drevo Ares can deliver up to 1,400/600 MB/s of sequential read/write throughput. We found the sequential read number very conservative and would peg the specification closer to 1,900 MB/s. It's important to remember that many of these products now use the famous "up to" specification. Thanks to IMFT's first-generation 3D technology, we find the stipulation on products with MLC flash as well as TLC. The SM2260 has one of the oddest cache algorithms we've ever tested, which makes it difficult to actually write data at the performance specification.

IMFT's first generation 3D NAND is already being replaced, and the change couldn't come soon enough. The 384Gbit TLC version brought us a handful of poor performing products that had to be sold at deep discount prices. Luckily for us, Drevo uses 256Gbit MLC 3D flash for the Ares. But don't get too excited yet. The first-generation IMFT 3D NAND delivered similar performance with SMI SM2260-powered SSDs. The Ares does benefit from the 3D MLC, but only in the endurance category. The Intel 600p has an endurance rating of just 144TB, but the Ares with MLC boosts the spec up to 350 TBW.

The Ares only reaches 100,000 random read IOPS. That's the same as a high-performance SATA SSD like the Samsung 850 Pro. The cache system allows random data to write "up to" 150,000 IOPS for a split second until the SLC buffer fills with data.

The SM2260 doesn't feature direct-to-die write technology, which flushes data directly to the underlying TLC NAND after the SLC buffer fills with data. Instead, all the data written has to first pass through the high-speed SLC buffer and then to the low-speed TLC NAND as sequential data. This increases the NAND endurance, but it also slows data transfers. An extended sequential write test exposes inconsistent performance as the data passes through both stages of flash. That makes this controller a poor choice for high-performance applications with heavy write workloads.

The performance and low capacity are enough to dissuade many enthusiasts, but Drevo makes up for the shortcomings with a low price point.

Drevo backs the company's SSDs with a three-year warranty. We put a star next to the warranty above because the company also includes a 10-day no-questions-asked policy that includes a full refund that includes your shipping costs. This is the first time we've seen a company take the warranty to this level, but OCZ Technology came close before the Toshiba buyout.

There are a few items in the retail package. Drevo includes a half-height bracket for small form-factor and 2U rackmount systems. The company will also send you a free baseball cap if you take a picture with your drive and post the picture to Facebook. The final value-add incentive is a 15% coupon to use on Armyourdesk.com. The coupon is only good for your first order.

Online shopping doesn't give you a sense of the Ares's premium feel. It's surprising given the cost of the company's solid-state drives. The company put some time into the package design and accessories. We wish more companies still put this much effort into their products.

The Drevo Ares is a good-looking drive; it has all of the hallmarks of a high-performance SSD. The heat sink covers the full length of the card on both sides, and we see a PCI Express four-lane connector, large capacitors to provide host power failure protection, and even a few blue LEDs that light up the edge with a soft glow of color.

There is still the famous, or in this case infamous, three-way selector switch. You can use the switch to reduce the Devo Ares' power consumption, but it reduces the overall throughput and introduces more latency during random data reads and writes. I've yet to hear anyone say that their computer is so fast that they should introduce latency to reduce performance. We've yet to find a notebook that uses a half-height half-length PCIe add-in card, so power consumption shouldn't be an issue. For perspective, your SSD uses much less power than your video card or even your onboard sound chip.

Dismantling the SSD proved to be easy enough. We found our way inside with little effort. The massive heatsink uses thermal pads to transfer heat from the core components. A thin film on the bottom heat sink does the same, but with less efficiency. The SMI SM2260 controller benefits the most from the cooling apparatus. That's the part that can run into heat issues, but you wouldn't know it because of the cache algorithm SMI uses on this model.