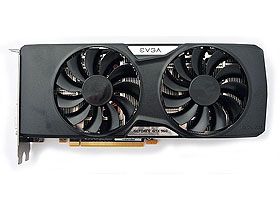 There are never any guarantees when it comes to overclockable hardware, even when a card is designed to push limits. Free performance will always be hard to pass up, though, so we’re going to see how far we can push EVGA’s GeForce GTX 960 SSC.

To overclock an Nvidia GPU, there are a number of approaches you can take. EVGA offers its own tuning utility called PrecisionX, which is an appropriate choice for this particular product.

Most of the overclocking functionality is found on the first page you see. On the left, there is a fan speed control override. By default, it’s set to Auto. But you can manually select the RPM with a slider bar. Alternatively, you can click on the fan curve button and set a custom control curve.

Next to the adjustment bars, you'll see a GPU clock readout, along with real-time temperature and voltage indicators. Of course, there's also a speedometer-style readout indicating the current GPU Boost clock rate.

Using the software to overclock is simple. We start off by raising the power limit to 110% and increasing GPU frequency in 5MHz increments. Our sample did not want to operate with the offset set above 50 MHz, yielding a base clock rate of 1329MHz, a GPU Boost rating of 1392MHz and an observed frequency of 1495MHz in gaming workloads. These are impressive results, especially considering the budget-oriented nature of this card.

The memory fares well, too. At first, we thought the highest stable offset was +520MHz. Unfortunately, Battlefield 4 proved unstable at that frequency. Backing down to +500 fixed this, yielding a 2003MHz memory clock (effectively 8012 MT/s).

Increasing the voltage let us bump the GPU up to +75MHz and the memory to +600MHz, which passed our first stability test. However, we experienced significant texture glitching with anything beyond a +50MHz GPU and +520MHz memory setting. Despite never witnessing thermal throttling, we just couldn’t make use of the extra voltage settings due to GPU and RAM limitations.

At the end of the day, we improved over the reference GTX 960's 7522 graphics score in 3DMark Fire Strike by less than 1000 points, landing at 8430 with our final overclock.

Prev Page Temperature, Noise And Power Benchmarks Next Page Worth Every Penny
76 Comments Comment from the forums
Be In the Know