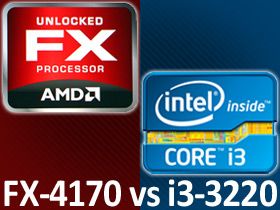 Intel's Ivy Bridge architecture does give us improved graphics performance. However, aside from a slight boost to instruction-per-cycle (IPC) throughput, the new design offers little more to enthusiasts shopping for a stronger processor. As a result, the new 3.3 GHz Core i3-3220 is fairly similar to the older Core i3-2120, which also ran at 3.3 GHz.

The situation is a little different when you look at AMD's mainstream line-up. The company recently introduced its FX-4170, which features a base close 600 MHz faster and a Turbo Core frequency up to 500 MHz faster than FX-4100. Granted you step up to a 125 W thermal ceiling when you embrace AMD's dual-module solution, and you pay $10 more. But we expect enthusiasts chasing performance to gladly make those compromises when a better experience is available. So, is it?

New action in the budget-oriented processor space makes for an interest re-match. Ever since introducing its Sandy Bridge design, Intel has enjoyed a quantifiable advantage in the gaming space, its Pentium G860 beating AMD's Phenom II X4 955 and FX-8120 in our suite using high-end graphics (Picking A Sub-$200 Gaming CPU: FX, An APU, Or A Pentium?) Conversely, we've shown that an FX-4100 can keep pace with Intel's Core i3-2100 when you use a less expensive GPU, which becomes the bottleneck in games (AMD FX Vs. Intel Core i3: Exploring Game Performance With Cheap GPUs).

So, with the introduction of the Core i3-3220, we thought it'd be prudent to revisit both companies' $125 offerings to see how they do in terms of gaming and productivity.

The match-up we have is both interesting and asymmetrical. The two processors are capable of executing four threads concurrently. Intel achieves this with two physical cores equipped with its Hyper-Threading technology to exploit underutilized resources, while AMD's FX-4170 employs two Bulldozer modules sporting a pair of integer cores, a shared floating-point unit, and a bunch of other shared resources. The FX-4170 includes 8 MB of shared L3 cache, while the Core i3 has 3 MB. AMD's FX-4170 operates at a base clock rate 900 MHz higher than Intel's offering, and it can accelerate a full 1 GHz higher under the influence of Turbo Core. The Core i3-3220 doesn't benefit from Intel's Turbo Boost technology at all, but instead relies on an architecture able to execute more instructions per cycle than AMD's. The entire FX family comes equipped with an unlocked ratio multiplier, useful for overclocking, while all of Intel's Core i3s don't accommodate overclocking at all, really.

If you consider the specifications on their own, the Core i3-3220 looks completely outclassed. But because the Ivy Bridge design enjoys far superior IPC than AMD's best effort, each core is made all the more effective, despite a substantial frequency deficit. To that point, there's also a colossal disparity in the power these two chips dissipate. The FX-4170 has a 125 W TDP, while the Core i3-3220, manufactured at 22 nm, has a 55 W ceiling. That's less than half of the FX.