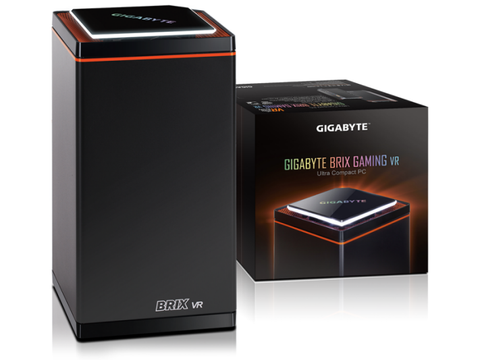 The Gigabyte Brix Gaming VR packs an Intel Core i7-7700HQ and GeForce GTX 1060 6GB graphics card into one of the smallest VR-ready PC gaming devices we've ever seen. The small form factor is attractive for consumers looking for a tiny device for their living room PC adventures, and the Brix Gaming VR provides excellent framerates in the latest AAA games at 1920 x 1080. However, 4K gaming isn't recommended, and if you've never worked inside an electronic device, installing the necessary components may be a tough task. Minimal USB connectivity can limit your choice of VR HMD if you use a wired keyboard and mouse. High temperatures under load holds the Gaming VR back from getting the most out of the GPU, but you'd be hard pressed to find a smaller GTX 1060-equipped gaming PC on the market.

Our recent Z270 desktop PC reviews put a focus on top-tier gaming machines leveraging the most powerful components available, with several of our review samples exceeding a price tag of $2,500. With the arrival of Intel’s 8th generation Coffee Lake processors, the Z270 platform has seen its time in the sun. However, until H310 and H370 chipset motherboards arrive, 7th generation Intel chips are still occupying many OEM product lines in the mid-range price tier.

With that in mind, we decided to take a look at a handful of these sub-$1,500 (and therefore still relevant) gaming rigs, specifically in the form of barebones mini PCs.

We’re familiar with Gigabyte’s BRIX gaming line—we took the Gaming GT for a spin a few months back, and we found the small form factor (SFF) gaming PC to be quite powerful at an exceptional price. Now, Gigabyte has an even smaller VR-ready machine: the BRIX Gaming VR barebones mini PC. Let's see if this Core i7 and GTX 1060-equipped game box can ride alongside its Gaming GT brethren in the halls of PC Valhalla.

The Gigabyte Brix Gaming VR is worthy of its name with its brick-like compact chassis, which takes form as a tall yet small 8.66 x 4.33 x 4.33-inch box that can easily find its place in your living room entertainment center. The casing is made of black metal and plastic, giving it a sleek look. The top of the device features an LED light that glows white and illuminates the ventilation around it. The bottom of the chassis is also ventilated, acting as an air intake, which forces fresh air to rise over the interior components and out the top.

From the front, the Brix Gaming VR is stoic and unblemished with a black plastic shroud, but the rear of the system sports a variety of connectivity options. There are two USB 3.1 Gen 2 ports (a Type-C and Type-A) capable of data transfer speeds up to 10 Gb/s and three USB 3.0 ports. This is enough USB connectivity to support both the Oculus Rift and HTC Vive VR HMDs, but in the case of the Rift (with Touch), you’ll be left with just one Type-A port to connect any other peripherals. However, you can also connect a keyboard and mouse via Bluetooth if you want to reserve the USB ports for VR devices, as the name of the PC suggests.

For display output, the Gigabyte Brix Gaming VR includes two mini DisplayPort 1.3 and two HDM 2.0 interfaces, making the device adept for multiple displays and VR HMDs. An Intel i219LM gigabit Ethernet port or Intel WirelessAC 8265 802.11ac WiFi will get you connected, and the overall design of the Brix Gaming VR makes a strong case for placement in your living room.

The Brix Gaming VR gets its power from a 180W adapter, drawing about as much juice as a laptop with its mobile components.

Under the hood, the Gigbyte Brix Gaming VR features an Intel Core i7-7700HQ processor clocked at 2.8 GHz with a maximum turbo frequency of 3.8 GHz in lightly threaded applications. The Nvidia GeForce GTX 1060 6GB graphics card inside the Brix Gaming VR is an MXM card, and it should provide comparable performance to that of a full-fledged desktop GTX 1060 6GB graphics card.

As a barebones system, memory and storage (and an operating system) aren’t provided, but you can equip the Gaming VR with two DDR4-2133 SO-DIMM modules, up to two M.2 2880 devices (PCIe or SATA), and a 2.5” SATA drive (SSD or HDD). Ideally, a moderate-sized M.2 SSD and high-capacity 2.5” HDD would make for a sweet storage pairing in the Gigabyte Brix Gaming VR.

To get to the component slots, you have to remove the four screws at the bottom of the chassis and pop out the plastic part of the bottom panel. Slide the plastic part of the case upwards and away from the metal. With the innards of the Brix Gaming VR exposed, locate the side covered with the metal plate and remove the two screws holding it in place. Lift up and swing the metal panel away from the centrifuge (it has a sort of floating hinge) and carefully unplug the fan and power cables connected between the boards to allow the board to swing fully away from the device and give you access to the M.2 and memory slots.

We equipped the Gigabyte Brix Gaming VR with a 256GB PCIe NVMe SSD, a 1TB 2.5” 7,200 RPM HDD and an 8GB (2 x 4GB) kit of DDR4-2133 (we’ll detail the specific parts on the next page), and after freeing the removable board from the tiny chassis, installing the components is a breeze. The M.2 slots, mounting posts, and screws are easily accessible on the same board as the SO-DIMM memory slots, and both are equally easy to install using the instructions Gigabyte provides. Once the M.2 storage and memory are installed, return the board to its original position (making sure to plug in the fan and power cables) and secure it to the chassis with the screws.

The 2.5” drive bay is on the other side of this panel (where the large heatsink is located), and it can be accessed by removing the two screws on either side of it and lifting the tray up and out of the centrifuge. The SATA power and data cable is taped to the nearby heatsink. Secure your 2.5” drive of choice in the metal tray with the provided screws, plug in the SATA connector, and replace the cage to the chassis. Finish up by screwing down the drive bay, sliding the plastic shroud back over the exposed components, and reattaching the bottom panel.

The Gigabyte Brix VR doesn’t come with an operating system or any software, with the exception of the driver disk. You’re on your own when it comes to obtaining a Windows installation, and that easily adds at least $100 to the bill. Combine that with a minimalist kit of memory ($70), a moderate capacity M.2 NVMe SSD ($120), and a 2.5” HDD ($60), and you will spend somewhere around an additional $350 just to get the Brix VR up and running. You could equip the device with even less ambitious components (just an HDD, even less RAM), but the cost savings would impact performance significantly.