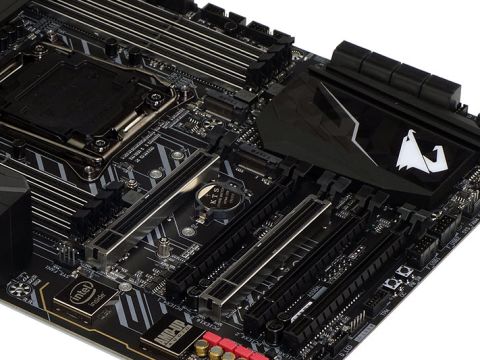 While many manufacturers choose to disable some of Intel’s integrated power-saving features, I enable these when running performance and power evaluations. The intent is to compare boards at the same CPU frequencies and produce the highest possible efficiency from those identical frequencies. Many of our readers set manual overclocks, and we’d hate to imply that one board’s 4.40 GHz setting will vastly outperform another’s.

The X299 Aorus Gaming 3 produces par performance in 3DMark and PCMark. Of those tests, the PCMark storage score is the only one to be used in our final performance calculations. And that’s because it’s based on file retrieval for real-world programs.

The X299 Gaming Pro Carbon AC surged ahead in Sandra Memory Bandwidth, yet fell a little behind in Cinebench R15. Of those wins and losses, the memory bandwidth score is likely to have the most impact in real-world benchmarks.

Swapping positions with both ASRock boards in most games, the X299 Aorus Gaming 3 falls slightly behind the X299 Gaming Pro Carbon AC in the memory-sensitive F1 2015 bench.

The X299 Gaming Pro Carbon AC drops back in Talos with its Nahimic audio software enabled. A look back at its review shows how FPS improves with that software disabled.

The only remarkable results in timed benchmarks appear to be the X299 Gaming Pro Carbon AC’s gains in Blender (CPU rendering), 7.Zip, and Handbrake. That same board registered a 30W higher-than-average TDP in our XTU evaluation, so those wins could easily be attributed to more aggressive cheating.

The X299 Aorus Gaming 3’s power consumption is a little worse than the X299 Taichi, which is its closest competitor in features and price. A look back at the top of the page shows that its losses are nearly twice as big at the power outlet as we should have expected from the TDP reading, leading us to believe that the voltage regulator might be a little less efficient.

Efficiency ratings are based on our entire X299 review series, where the Asus Prime X299 Deluxe was the only board to stick within Intel’s TDP rating for our CPU. It’s the spoiler: Everyone else fails.

Our overclocking chart looks boring because our CPU is thermally limited to a relatively mild core voltage level. The cheapest board in the X299 review series, the X299 Aorus Gaming 3 falls behind competing brands only by a small amount in DRAM overclocking.

Performance Per Dollar is a brutal way to measure a feature-laden board, but the X299 Aorus Gaming 3 isn’t feature-laden. The money saved goes directly towards a higher value score.

I know that some of you are thinking that the X299 Taichi gives you two extra network controllers and a Port 80 diagnostics display for only $10 more. Of course that’s the discount price. The X299 Aorus Gaming 3 also had a discount price, but Gigabyte didn’t make that permanent. Perhaps it will. After all, the $300 X299 Taichi fluctuated for a while before settling down at $290. And the X299 Aorus Gaming 3 was available for only $250 a week or so ago.

The X299 Taichi already won a recommended award, and that recommendation still makes sense given that its improvements are worth more than the $10 price difference. Yet the X299 Aorus Gaming 3’s stellar memory O/C performance, more elaborate RGB lighting, and lower price will certainly appeal to many buyers. A higher award would have been available had Gigabyte locked in its recent discount price, but the X299 Aorus Gaming 3 is still worth our stamp of approval at full price.