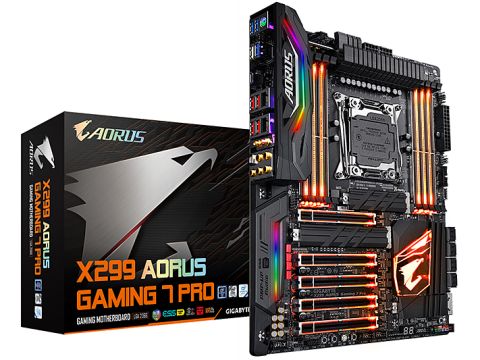 The X299 Aorus Gaming 7 Pro has all the features and benefits of the X299 Aorus Gaming 7, along with a higher-capacity voltage regulator and a couple extra M.2 covers. Potential buyers who were considering the former should further consider the additional amperage offered in this version, to support their extreme overclocking ambitions.

Manufacturers like Gigabyte have made great strides in the X299 market in the six months following the Skylake X launch, but a lingering problem has been what they should do about the old reviews that used under-developed firmware to produce atypical performance and power data. Retesting previous samples can easily snowball into continuous retests with no further new product reviews as we attempt to be fair to everyone, but manufacturers do have a workaround: Release revised hardware under a new model name. Welcome the X299 Aorus Gaming 7 Pro.

Adding the word “Pro” to the model name gets buyers an amped-up voltage regulator (60A x 12 phases), a new set of heatsinks to cool it, two additional M.2 heat spreaders, and all six months of firmware advancement out of the box. In other words, the new model has everything that many potential buyers felt was missing during the original model’s review.

Buyers still get five x16-length PCIe expansions slots and are still limited to 3-way SLI at most when using a 28-lane CPU at least (ie, Core i7-7800X and above). That configuration typically requires an eight-slot case, since the third 8-lane slot is at the bottom of the board. Crossfire can go more ways, but only if single-slot cards are used. Most of the SLI restrictions won’t matter at this market level since the top cards don’t support 3-way, but the second slot’s sharing of PCIe lanes with the middle M.2 connector could be an issue for any buyer who was hoping to use it. Though we’d have preferred the shared pathways be directed to a less-useful slot position (such as the fourth slot, where it’s more likely to be blocked by a graphics cooler), Gigabyte likely designed the layout for optimized trace routing.

The X299 Aorus Gaming 7 Pro also retains the previous version’s excellent I/O panel port selection, with ASMedia’s high-bandwidth ASM3142 two-port controller driving a Type-C connection from one port, and a four-port hub from its other port. While that means all four of its connected Type A ports share bandwidth, any one of these could still operate at or near the peak rate of a single port.

Four USB 3.0 ports (aka USB 3.1 Gen1) are also present, one marked in white for Gigabyte’s Q-Flash Plus updater, which can automatically update firmware from a flash drive if both on-board firmware images are corrupted or incompatible with a newer model CPU (when it didn’t automatically initiate on a previous model, we forced initiation by removing the CPU). It seems a little wasteful to us to exclude USB 2.0 entirely in favor of USB 3.0, since the former supports all keyboards and mice, while the later does so while also requiring additional resources at one HSIO pathway per port. HSIO pathways are also able to feed PCIe lanes or SATA ports, and evidence of this shortage has already been discussed in the PCIe slot vs M.2 pathway sharing mentioned above.

One of the two I/O panel gigabit Ethernet ports is controlled by Intel’s PHY, the other by a Killer E2500 PCIe-based network IC. The latter is paired with the Killer 1535 Wi-Fi controller to enable Killer DoubleShot Pro bandwidth and packet optimization.

Even the analog audio jacks are enhanced with gold-plated connectors, an ESS SABRE 9018 DAC, and Creative’s Sound BlasterX 720° enhancement software.

You may have heard most of this before, but it’s worth repeating for those who haven’t that the Aorus Gaming 7 Pro’s front-panel USB 3.1 Gen 2 header is located next to its USB 3.0 header, a fan connector, the 24-pin power connector, and another fan header within the upper half of the board’s front edge. The lower half of the same edge features eight SATA ports, which all face forward so that attached cables will fit underneath the leading edge of long expansion cards.

The top edge features three fan headers, a second RGBW header, two EPS12V connectors, and an I/O connector for the I/O panel shield’s lighting. An eighth fan connector is positioned above the rear edge of the top slot for easier cabling to the rear fan of most cases, and all eight fan connectors support both automatic detection and manual selection of PWM/voltage fan control modes.

Next Page Software & Firmware
Be In the Know