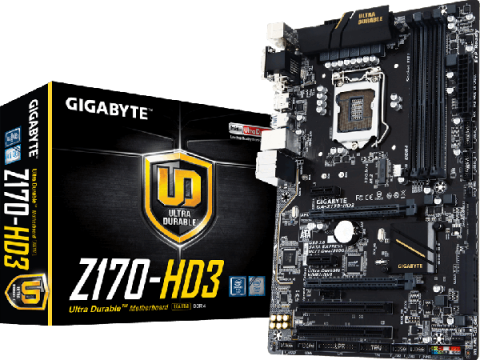 Gigabyte System Information Viewer has limited functionality with the Z170-HD3, showing only such basic details as system clock, CPU, DRAM and fan speed. Hidden within are advanced fan controls. System Information Viewer failed to detect this motherboard’s voltage levels, though we assume that Gigabyte will have this fixed in relatively short order — this is a new platform, after all.

Gigabyte EasyTune works far better than the above SIV, and is probably far more important to performance enthusiasts. Basic adjustments include an ECO mode that saves 18W under load via reducing CPU voltage by approximately 100mV, an OC mode that locked our CPU to 4.4GHz regardless of the number of cores used and cost only 1W idle/20W full-load in energy, and an AutoTuning that caused our system to lock up without saving the results.

Advanced CPU controls include BCLK, CPU VCore and DRAM voltage that all worked according to our meter and CPU-Z, plus an Advanced DDR OC menu that required a reboot to set DRAM multiplier via firmware. Though other functions such as DDR timings were non-functional, EasyTune does offer overclocking profile saving and retrieval.