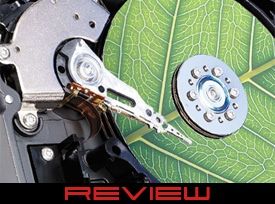 Enthusiasts—even the ones who love powerful graphics cards and multi-core processors—are increasingly aware of the fact that energy conservation is in vogue. More and more new products are being given catchy labels with “green,” “energy efficient,” and “environmentally friendly” in them, as popular vendors capitalize on this market. However, only some of the claimed power-saving components really are power-efficient—others use less power, but underperform in the process, which means they take longer to complete the same task, negating some of the savings. Western Digital’s new WD10EADS Green Power drive aims to reduce drive power consumption while increasing performance, and it gets very close to accomplishing just that.

Green IT Does Not Exist, Really

To many manufacturers, “green” is synonymous with “low power.” This may be a reasonable assumption in many cases, but not always. A low-power part may actually require more power than a mainstream part when there is a certain workload to take care of. Efficiency is what counts most, but that still doesn’t turn a green component into an environmentally-friendly part.

The truth is that no hardware component can really be considered “green” from an ecological standpoint, as lots of natural resources—energy, water, minerals, and waste byproduct—go into producing them. Start with all the raw materials, such as oil, copper, or silicon. Turn them into components such as circuit boards, controllers and platters. And voila, several assembly lines later, you have the drive itself.

Do The New Caviar Green Drives Make A Difference?

With that said, every little bit helps. Since hard drives are really the only choice when it comes to sufficiently fast, high-capacity storage, users should focus on efficient products that deliver the best performance with low power consumption.

The first generation of green drives by Western Digital was called the Caviar GP, where GP stood for “Green Power.” This series launched exactly one year ago, and included WD’s first terabyte hard drive. We followed up in June when we compared Hitachi and WD drives that are power-optimized, and it turned out that Hitachi’s 7,200 RPM drive could beat the 5,400 RPM Caviar GP. Let’s see what the new WD Green Power drives can do.