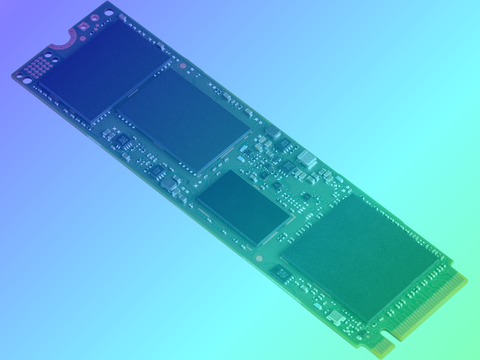 Much of the Intel 600p's appeal stems from the limited number of 1TB SSDs on the market. Samsung's 1TB 960 EVO, which retails for $499.99, is the only real value competition. The Samsung 960 Pro retails for a whopping $695 at the time of writing.

The 1TB OCZ RD400 and Plextor M8Pe both border on $500. Plextor's M8Pe (PX-1TM8PeG) M.2 with an integrated heatsink retails for $399, but only when it's on sale. The sales seem to come and go quite often, so timing is essential.

NVMe SSDs are also filtering to the US and Europe from Asia. The Chinese vendors are coming, but most of their SSDs are limited to a maximum capacity of 512GB. The Galax HOF PCI-E, the first 1TB Phison PS5007 E7-based SSD, hit our office recently. Galax is the first, but we expect to see more of these products in the future. The HOF PCI-E sells for around $1000 in Asia and is a limited-edition model. We expect prices to drop when more 1TB E7-based products hit our shores.

Two products in our tests use TLC flash. One of the TLC-based products is the fastest during the sequential read test, and the other TLC-based SSD is the slowest. The Samsung 960 EVO wields a five-core controller, but the SMI SM2260 uses only two cores. Logic dictates that you need more cores to push the limits of PCIe 3.0 x4 with the NVMe protocol. Even though the SM2280 is an eight-channel controller, it falls behind many of the other products due to raw processing power. That's not to say IMFT's 3D1 is great, or even comparable to Samsung's V-NAND. We haven't been kind to Intel's 3D1 (first-generation 3D NAND) flash, but we haven't seen the flash paired with anything remotely considered high-performance on the consumer side.

Intel claims the 600p 1TB is capable of up to 1,800 MB/s. The drive surpasses the specification, but not with a single thread. We still test SSDs using a single worker because it is representative of how most software accesses storage. As a result, our results are lower than Intel's specifications.

The 600p encounters difficulty during write-intensive workloads. The dual-core SMI controller lacks direct-to-die data write technology, so data must transit the SLC buffer before folding to the TLC area. The folding process slows sequential write performance when the SLC buffer is full.

HD Tune Pro allows us to examine 128KB write traffic in real time. The SLC buffer absorbs incoming data at roughly 550 MB/s, but performance varies wildly after the utility writes 160GB of data. During the low points, the SLC buffer is folding data to the TLC. We can also see the SLC buffer open back up for incoming data (high points).

The amount of data that fits in the SLC buffer changes with the different 600p capacities. The 1TB model we're testing today has the largest SLC buffer. You can transfer two full Blu-Ray ISO files before the SLC buffer fills. This is an important point because we consider a single Blu-Ray to be one of the largest transfers most people perform on a regular basis. Any file transfer over 50GB falls outside of normal daily use. The 600p gives us enough SLC capacity to move an impressive amount of data before the SSD falls back to native TLC performance.

The 600p 1TB has difficulty with random read workloads. The drive achieves less than 7,800 IOPS at QD1. The best SATA-based solutions, even those equipped with TLC NAND, reach 10,000 IOPS. We use the 10,000 IOPS mark to separate mainstream and high-performance SSDs. The 600p's lacking low-QD random read performance leaves us with a gray area. On the one hand, we say the 600p can kill high-performance SATA. On the other hand, we see that Intel failed to drive the stake through SATA's heart. Our real-world software tests will show why it's important to deliver high IOPS performance at low queue depths.

Random write measurements are the last block in our four-corner suite. The 600p falls again to the bottom of the performance charts, but at least it has company. The Galax HOF PCI-E and Plextor M8Pe have nearly identical random write performance from QD1 to QD8. The 600p's sharp performance decline at QD32 marks the point where its SLC buffer becomes saturated with incoming data. This causes performance to fall to the speed of the native TLC NAND.

In 2014, SSD manufacturers moved away from emphasizing four-corner performance and focused on mixed workloads. The idea is that real world workloads are always reading and writing simultaneously. We analyzed several common workloads and came away with two ratios. An 80-percent read workload represents normal desktop use, while workstation workloads move the needle to 70-percent reads.

The Intel 600p performs much better than the 4-corner sequential tests led us to believe. The drive smashes the mixed sequential test at lower queue depths.

The mixed random test is more in line with the 4-corner test results for random data. The 600p isn't alone through--at QD2 all the drives provide nearly identical performance. The spread between the best and worst drives is minimal until QD8.

Entry-level NVMe SSDs are still new, so most of us associate the speedy protocol with workstations and heavy workloads. The sequential steady-state results show that the Intel 600p is more consumer than prosumer.

Intel didn’t design the 600p for databases or heavy write environments. Intel spent years preaching the benefits of performance consistency, but it didn't place that focus on this product. We wouldn't recommend the 600p for PCH-based consumer RAID arrays.

The Intel 600p 1TB fell to the bottom of nearly every synthetic test, so it isn't surprising that it's the slowest to load real-world applications. The 600p 1TB equals or outperforms the Samsung 850 EVO 1TB and other SATA SSDs in many of the individual tests. While the 600p is slower in many of the tests that rely on heavy random read access, it leverages the NVMe protocol to deliver higher sequential performance when it loads large data sets.

The Samsung 850 EVO 1TB, one of the fastest consumer SATA SSDs on the market, delivers a score of 308.32 MB/s. The Intel 600p 1TB weighs in at 340.16 MB/s. The price is comparable between the two, but only one will slot directly into your motherboard.

You will pay a heavy price for subjecting the 600p to extended write workloads. If your daily activities include any workstation-focused work that goes beyond game installations, the native TLC performance without direct-to-die write technology will slow the drive to a crawl. This is a case where you should know your workload. If your workload isn't write-heavy, you won't write enough data to saturate the SLC buffer. The earlier tests show you need to write more than 100GB of data to saturate the buffer, which is a fair amount of writes that most of us don't do on a weekly basis.

The moderate workload service time results indicate the 600p will give you a rewarding experience if you stay within the constraints of the SLC buffer. The 600p isn't as good for daily tasks as some SATA drives are, but the results are comparable.

The disk busy time results are nearly identical to the service time tests. The results show the theme clearly; heavy workloads are taxed with high latency, but moderate workloads are more than acceptable.

The responsiveness sub-test is a feature of BAPCo's new SYSmark 2014 SE suite. It uses real applications and measures the service time to calculate a storage responsiveness score. The base score of 1000 comes from an OEM Samsung SSD with 16nm planar TLC NAND, which is similar to the Samsung 750 EVO series.

The Intel 600p doesn't provide the same responsiveness score as the Samsung OEM SATA SSD, but it isn't too far behind. The 600p isn't perfect, but it's "good enough."

The Intel 600p 1TB delivers acceptable battery life in our Lenovo Y700-17 gaming system. We measured more than five and a half hours of battery life during the BAPCo MobileMark 2014 1.5 test.