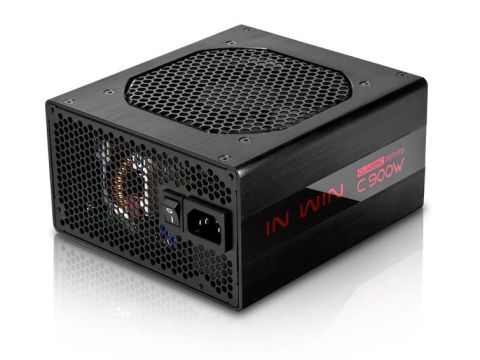 Our measured hold-up time is less than what's required. We expected this since the bulk caps' combined capacity is low for this unit's capacity. At least the power-good signal is accurate.

The registered inrush current with both voltage inputs is low for a 900 W PSU.

Load regulation is mediocre and way behind the competition. In Win focused more efficiency and ripple suppression, but didn't pay enough attention to load regulation. In order to provide more than 12 V under any load, the +12V rail has a nominal voltage that exceeds 12.35 V during the 10% load test. We want all rails to be close to the voltages defined by the ATX spec, so we don't agree with overvoltage tricks.

As far as efficiency is concerned, the corresponding 80 PLUS Platinum requirement is satisfied in the 20% load test. This is not the case, however, for the 50% and full load tests, where the unit's efficiency is significantly below the specified thresholds. In general, the only positives we come away with are low noise and the PSU's ability to deliver full power under high operating temperatures. Those just aren't enough to keep us happy.

Prev Page A Look Inside And Component Analysis Next Page Efficiency, Temperature, And Noise
5 Comments Comment from the forums
Be In the Know