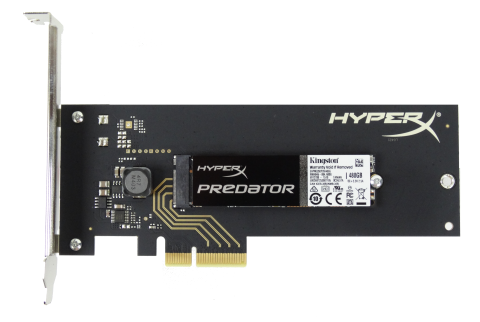 A Closer Look At The Kingston HyperX Predator

It's been a few years since Kingston released a premium SSD with this much attention to detail in the presentation. The back of the package gives us quite a bit of information about the product, which will hopefully carry over to a more informed shopping experience.

The Predator sits under layers of paper and foam with the documentation in between. Inside, we find a sticker, code for Acronis True Image and a warranty statement.

Here are the package contents laid out. We're testing the 480GB model that ships with a desktop PCIe to M.2 adapter. The HyperX-branded card includes two backplates, one for half-height and one for full-height installations. Most 2U servers require the smaller bracket.

Kingston manages to cram eight Toshiba A19 NAND flash packages on the M.2 2280 double-sided form factor. Most early adopters will use the HyperX Predator in a desktop, but over time more mobile users will choose M.2-based SSDs to replace the drives that ship in notebooks. Lenovo charges $700 for a 512GB PCIe-based M.2 SSD in the X1 Carbon Gen 3. It would be cheaper to purchase the Ultrabook with a SATA-based drive and upgrade it with a faster PCIe-based SSD like the HyperX Predator.

The HyperX Predator uses a second-generation PCIe-to-flash controller, which is newer than the Marvell processor used by Plextor in its M6e-series products.

Kingston has a lot of experience packaging DRAM, and it uses the company's own branded product to buffer page table data.

The flash comes from Toshiba and is second-generation 19nm NAND. We were surprised to see so many packages on the 2280 form factor. It's a tight fit, but Kingston squeezes everything in.

Current page: A Closer Look At The Kingston HyperX Predator