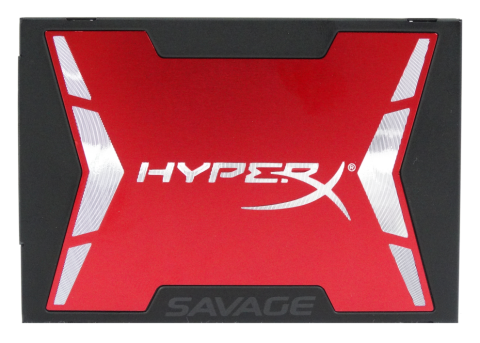 The SATA-based SSD market is so saturated with good drives that it's nearly impossible for a mediocre offering to earn a recommendation. When the product's price is as high as Kingston's HyperX Savage (240GB for $150), it had better be impeccable or risk falling below Samsung's 850 Pro (256GB for $162), SanDisk Extreme Pro (240GB for $160) or Samsung 850 EVO (250GB for $130). Before we get into that, let's look at what Kingston does right with its HyperX Savage.

There is no denying that Kingston is diluting the stature of the HyperX brand. Once an indicator of the computer industry's best components, Newegg now shows over 500 hits in a search for 'HyperX'. The HyperX Fury really sealed the deal for me; Kingston's enthusiast moniker went from premium to sub-par in one blister pack. The HyperX Savage gives us a rebirth of the extravagant retail box and accessory package. Opening it up, the quality is apparent, you see everything needed to install the drive and you know that this is a special product.

The Savage delivers class-leading sequential read and write performance. In both categories, this is the fastest SATA-attached device on the market. Of course, most of us move large files on a fairly regular basis, but those sequential transfers typically go to secondary drives; I'm not sure that many enthusiasts are purchasing new premium-priced SSDs for this task.

At its weakest point, the HyperX Savage 240GB is unacceptable. Mixed random performance using 80% reads at 20,000 IOPS is the worst we've seen from a modern SSD. Most of us will never get beyond a queue depth of eight, but at QD4 the damage is already done. Sequential mixed workload performance isn't much better. Again, the Savage 240GB is at the bottom of our charts, lower than SSDs costing significantly less. One-hundred percent random reads and writes are not as bad, but we don't just read or write data with a boot drive. If adding just a little mix degrades performance this much, then you might as well purchase a value-priced drive and save some money.

We're frankly surprised that Kingston, Patriot and Corsair have already released products with the Phison S10 controller. We've heard it's an expensive processor. Maybe those companies managed to secure a lower price until Phison readies its performance-enhancing firmware. After all, the trio lacks firmware engineers of their own. Aside from Samsung, all of the top-performing SSDs use Marvell controllers. Marvell doesn't provide retail-ready firmware to its partners; you need a team to put the pieces together. Kingston just released the HyperX Predator PCIe-based SSD with Marvell logic, but its Savage doesn't employ a Marvell processor. We can assume that Kingston either put together a firmware team or paid a high price to release the 88SS9293 controller first and got firmware with it.

Kingston, Patriot and Corsair know a higher-performance firmware is on the way, but chose to launch S10-based products before the magic sauce was ready anyway. We have a good idea why: all three companies had most of their eggs in the SandForce basket. Now they've jumped over to Phison. The HyperX family was always built around SandForce (even the HyperX Predator was shown with SF3700 at CES). Might that ship have sunk?

It's a good guess, though that fails to address the fact that today's S10-based drives are not worth their high prices. When Phison releases its impending firmware update, my opinion may change. But for now, if you want to buy a premium SSD, there are better options available. Should Phison's new software fail to satisfy the hype, these products only become attractive at mainstream SSD prices.