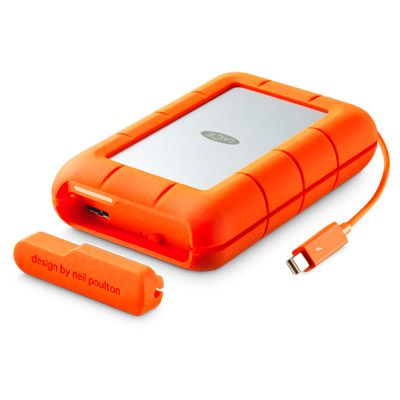 All things considered, LaCie built the best product with the components available. The Rugged RAID drive delivers higher performance than every other large-capacity portable storage product on the market. To top it off, it's shock-resistant, and dust- and water-repellent.

Most enthusiasts would question the usefulness of a portable storage drive designed to survive abuse, until they actually need one. But by the time you realize you need rugged storage, it's already too late. Some would argue that the best devices to build for harsh treatment are thumb drives and SSDs. The problem with flash, though, is that it gets expensive when you start looking a big capacities. Sure, there are very large SSDs out there. I can buy a Ferrari, too, if I plan to live in it.

The LaCie Rugged RAID is designed for working professionals whose offices aren't lit with incandescent light or surrounded by isolation walls. Its 4TB capacity begs for multimedia files that zip to and from your system at higher than hard drive speeds thanks to an on-board RAID controller. If you move mission-critical data, the Rugged RAID also supports RAID 1, keeping the same data on two disks for extra security.

Security comes in many forms. It's one thing to have your data on redundant repositories, but encryption is required to truly keep sensitive information safe from unauthorized viewers. The Rugged RAID adds a software component that applies AES-256 to your data. The software package also ensures you can access protected files on host systems using different file systems. Many of LaCie's products take extra steps to fully support Apple devices. Not all products on the market are designed to balance both popular operating systems.

There are very few external storage devices on the market that combine portability with the resilience of RAID. When you add in its ruggedness, only the LaCie Rugged RAID 4TB stands out. That's not to say a competitor doesn't exist; we just didn't find one. The Rugged RAID supports several unique features, combining them to make a unique product. In RAID 0, you get 4TB of capacity. That's cut in half if you switch to RAID 1, trading you the resilience of data mirroring instead. The closest competitor is WD's My Passport Pro, but it only connects via Thunderbolt and is limited to Macs.

Meanwhile, the Rugged RAID supports both NTFS and FAT32 file systems with LaCie's bundled software tools. This gives Windows and Mac users access to the data volumes (NTFS is read-only on Apple products). The data is also stored behind 256-bit encryption, so it's safe if you physically lose the hardware.

LaCie connects its Rugged RAID through 10 Gb/s Thunderbolt or USB 3.0 at 5 Gb/s. The drive isn't fast enough to saturate either interface, but easily pushes data faster than USB 2.0. The 2.5-inch HDDs use 5V power, unlike 3.5-inch drives that still rely on a 12V rail. USB 3.0 does feed 5V to the to the device, though two mechanical disks need more current than some systems provide. Because of that, you have to use the included external power supply. Thunderbolt doesn't suffer the same shortcoming; you can leave the extra cable in the box if you plan to use Thunderbolt exclusively.

According to LaCie, the system is shock-resistant and can survive falls from up to five feet when it isn't turned on. It can supposedly take up to one ton of weight on it. While we didn't have that exact mass to test with, the drive did survive being run over with a 5545-pound Mercedes GL450 (curb weight) with both the front and back tires. The car doesn't have perfect front-to-back weight distribution, so we exceeded LaCie's claims for a brief moment in the driveway at roughly 3 mph.

The first number in the IP54 Dust and Water rating system relates to solids, and the second number relates to liquids, summarized by this information:

Dust Protected - Ingress of dust is not entirely prevented, but it must not enter in sufficient quantity to interfere with the satisfactory operation of the equipment; complete protection against contact.

Splashing Water - Water splashing against the enclosure from any direction shall have no harmful effect.

The Dust Protected rating is the second highest on the scale, and the Splashing Water is right in the middle.

LaCie sells the Rugged RAID 4TB on its official product page for $420, though it's currently on back order. We found a handful of reputable online e-tailers that had the drive in stock, selling it for $400. LaCie covers the Rugged RAID with a three-year limited warranty that can be extended through an optional purchase.

This is the drive with its cover removed. The indented orange area at the top-left glows bright orange when the drive is connected or powered on. Again, USB 3.0 operation requires external power. It's a clumsy way of hooking up to your machine, with the USB cable going one way and power going the other. However, it does bestow more flexibility than a Thunderbolt-only device. If you have a Mac at work and a PC at home, you can use the drive both places.

Perhaps you were wondering where the Thunderbolt connector is located, since we haven't mentioned it yet. The cable is connected directly to the metal case, and it wraps around the center groove for storage. The head of the Thunderbolt cable tucks into the opening in both the body and the cover. Thunderbolt cables are expensive since they have active electronics inside. With the cable permanently connected, you won't have to worry about misplacing and having to replace it. Just be careful not to mistreat it.

A fixed cable isn't without drawbacks. To test the drive, I had to reach around my PC and poke around to find the Thunderbolt port. Owners of cylindrical Mac Pros can spin the system around enough to make a direct connection. You may also have a chain of Thunderbolt devices that the drive can plug into. I would personally like to have a longer cable, but not at the expense of it being detachable.

Inside, we found a pair of 2TB Samsung 2.5-inch hard disks. Samsung and LaCie were both acquired by Seagate in recent years. A PCB underneath contains the RAID-oriented logic.

The inner design is just as impressive as the outside, demonstrating nice build quality and attention to detail.

When you attach the Rugged RAID to a PC, you're asked for permission to connect to the device.

You still can't use the drive quite yet, though. Within a few seconds after connecting, a software prompt walks you through the setup process, the most important part of which is defining how the device should be formatted. You'll need to adjust the slider to dictate how space on the drive should be allocated. This will be determined by how you intend to use the Rugged RAID (in Windows-only environments, on a mix of operating systems or as a tool for sharing information between different machines).