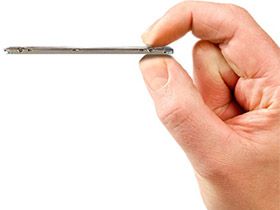 Seagate's Laptop Ultrathin HDD is about as thick as a stack of six credit cards. Let that sink in. With a Z-height of 5 mm, the hard drive is just over half as thick as the 9.5 mm you expect from a typical 2.5" disk, and those are already pretty darned thin. Additionally, these drives weigh in at 93 g. So, not only are they crazy-tiny, but they're also ultra-light, too. This should be exciting news for the folks who want plenty of capacity from their mobile devices, but are still sensitive to cost (as in, they can't necessarily afford a 256 GB or 512 GB SSD). Naturally, then, Seagate is aiming its newest Laptop Ultrathin HDDs at small laptops and Ultrabooks.

Other than its form factor and weight, the Laptop Ultrathin HDD's other technical specifications are fairly similar to its peers. The drive family employs one platter spinning at 5400 RPM, features 16 MB of data cache, and communicates across a 6 Gb/s SATA interface.

The line-up is three models strong, including the 320 GB ST320LT030, the 500 GB ST500LT032, and, another 500 GB version that sports automatic encryption. According to Seagate, the latter is compliant with Trusted Computing Group standards for Full Disk Encryption.

Of course, as we know, just because a product's technical specifications look familiar doesn't mean that measured performance is going to sync up. Let's have a look at how Seagate's Laptop Ultrathin HDD stacks up to the thicker competition.