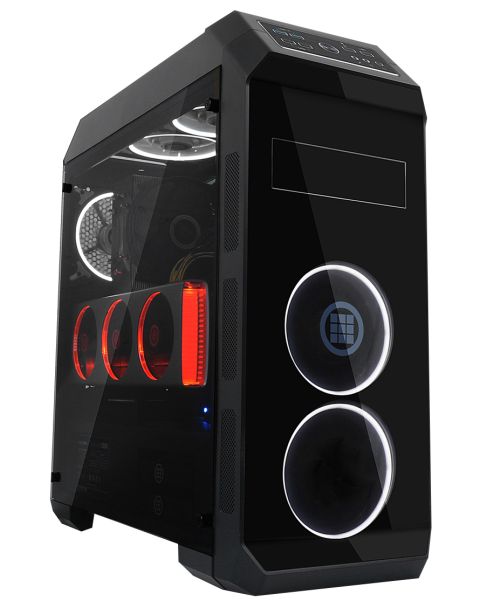 A plastic bag containing various screws, zip ties, system speaker and cloth for cleaning the tempered glass side panels is stowed inside one of the open 3.5" drive bays. The bag also contains the manual.

Painted black to match the exterior, the interior of the Master M400 is rather roomy for a mid-tower. There are four cable pass-through holes with rubber grommets located in the right hand side of the motherboard tray and two in the top of the PSU tunnel.

The seven expansion slots allow for multi-GPU setups, with cards up to 390mm in length. And you'll still have room to spare for radiators and all-in-one coolers in the front of the chassis. Unfortunately, the expansion slot covers are the punch-out variety. This case can be outfitted with CPU coolers up to 160mm and power supplies up to 210mm in length.

At the bottom of the main compartment you will find a large non-removable PSU tunnel that covers your power supply and two drive bays. There are two large cut outs in the side of the PSU tunnel; one for drive tray removal and one that is presumably there to allow you to show off your power supply logo.

The Master M400 is equipped with a single, space-saving 5.25" optical drive bay slot in the main component compartment. As you can see from the photos, the cut-away design of the 5.25" drive bay allows optical drives to be supported in the front, while holes in the motherboard tray let you attach the rear of your optical drives to the chassis frame.

Finally, the M400 comes equipped with a vertical VGA card holder from the factory. This removable plastic holder allows end users to install a PCI-E x16 riser cable to show off their high-dollar graphics card by mounting it vertically, but the riser cable is sold separately. Also, we were unable to vertically mount the MSI RX 580 Gaming we use for testing because, at 140mm tall, it came into contact with our 153mm CPU air cooler. Obviously this would not be a problem with stock height coolers or all-in-one liquid coolers but it is definitely something to keep in mind when selecting components.

The Master M400 is outfitted with two LED-lit 120mm intake fans in the front of the chassis and a 120mm LED fan in the rear of the case near the CPU socket area. In total, you can install up to five 120mm fans. The mounting locations on the top and front of the case can accommodate up to two 120mm fans. The rear exhaust fan location supports one 120mm fan. If you look closely, you will notice that the front fans have the option to slide both fans up about 65mm. This gives you the ability to fine tune the airflow in your system.

The fan control wiring system is a rat's nest. To save money, the M400 isn't equipped with a proper fan controller. Instead, all the fans (and any subsequent fans added by the end user) are all daisy chained, making for a huge mess of tangled wiring. SilverStone's Redline Series RL06 is equipped with a fan control hub that not only allows end users to easily control up to ten fans, it helps keep cable clutter to a minimum and doesn't add a lot to the overall price of the case.

The M400 can accommodate radiators in three locations: The two 120mm mounting locations in the top of the case can be used with a wide range of 240mm radiators and all-in-one coolers from various manufacturers. As is the case with most chassis that have mounting locations in the top panel, some coolers may be limited to a single fan configuration, depending on the size of your motherboard.

The front of the chassis can accommodate radiators up to 240mm in both, with enough room for fans mounted on both sides in a push-pull configuration. The rear of the chassis supports 120mm radiators or all-in-one coolers in the exhaust fan location over the CPU socket area in single and dual fan configurations.