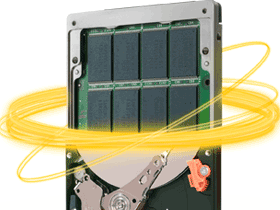 We've seen hard disk drive technology make significant advances over the many years we've been covering it. If you were to map out, over time, the cost of mechanical storage per gigabyte, hard drives look pretty darned good. The rate at which performance has increased isn't nearly as impressive, though. Hard drives have increasingly become performance bottlenecks in high-performance PCs.

So, when solid-state drives first appeared on the enthusiast radar roughly three years ago, they were quickly embraced as the best single performance upgrade you could buy. An SSD's main advantage is its low access times, which are an order of magnitude faster than hard drives. That advantage, however, hasn't changed much since solid-state technology first hit the scene. Although subsequent generations of SSDs improve storage performance in other ways, there's no way to match the bang for your buck that those first SSDs offered. If you already own an SSD, you're probably better off upgrading some other component inside your PC before spending more money on a more modern solid-state drive.

Evolution in SSD technology has been primarily confined to changes in NAND and controller technology. The constant efforts to improve NAND technology have been relentless, with die shrinks occurring every year. Each time a manufacturer achieves smaller process geometry, it can push down the cost of flash memory and enable more affordable SSDs.

Even today, though, a 500 GB SSD still costs more than a well-optioned laptop. We'll never see cost parity per bit between hard drives and SSDs due to the investment that goes into such aggressive manufacturing roadmaps. SanDisk predicts that current NAND technology will continue to dominate for the rest of the decade. But plans to replace NAND with 3D ReRAM are already in progress, and newer technologies could be in production within five years. Resistive RAM will enable lower costs, better endurance, and faster random performance. So, it’s unlikely that SSDs as they exist right now will persist beyond the end of the decade.

Bottom line: SSDs are expected to remain a premium technology until they're eventually phased out. They'll never match the cost per gigabyte of hard drives, and they'll never catch the growing capacities of hard drives. Very low access times make SSDs ideal for installing an operating system and performance-sensitive applications. But their high cost makes them unsuitable for user data, like music and movie libraries.

Consequently, hard drives are typically still used for those sorts of files, resulting in a tiered storage environment. But what if you could merge both technologies into one product and achieve the best qualities of both hard drives and SSDs? Enter the hybrid hard disk drive (HHDD), a relatively new idea in the storage world. We reviewed our first hybrid hard drive more than two years ago in our Momentus XT Review: Seagate's Marriage Of The HDD And Flash Memory. This time around, we're spending some lab time with that model's successor, the 750 GB Momentus XT, comparing it to solid-state and hard disk drives.

Next Page Comparing Mechanical, Solid-State, And Hybrid Storage
67 Comments Comment from the forums