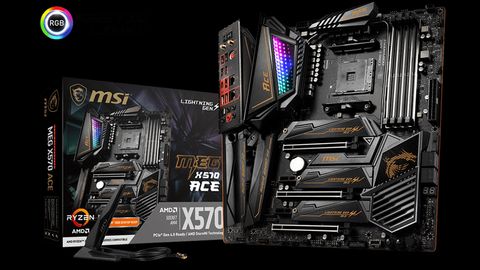 MSI Click BIOS 5 remembers the user’s chosen interface version (EZ or Advanced mode) upon exit, so that tuners can more-quickly pick up where they left off. We left off at 4.20 GHz, unable to get our CPU to go any higher at up to 1.40V and finally backing down to 1.366V under heavy software load when higher settings proved unfruitful.

Our Hynix-based HyperX DDR4-2933 reached an alarming DDR4-4333 at full stability using the board’s 1.330V setting, which corresponded to a measured 1.354V at the DIMM slots. That’s a full 24mV over-voltage, which is why we’re forced to get out the meter in the first place, and it’s also why we’ve picked a DRAM voltage limit (1.355V) to prevent cheating in these comparisons.

Our memory overclock came at 20-21-21-21-42 timings, as switching to straight CAS 21 settings didn’t get give us an additional stability. CAS 21 straight timings were originally picked in hopes of pushing these modules to DDR4-4200, and 4333 certainly beats that. On the other hand, that achievement happened with only two DIMMs installed, and the full four-DIMM kit reached a mere DDR4-4000.

Other OC menu items include CPU specifications and DRAM timings reports, and advanced CPU features settings that we didn’t need to touch to reach our overclock.

MSI’s M-Flash firmware update utility can be launched from within firmware, though it opens a separate GUI.

Up to six custom firmware configurations can be stored as user profiles on what space remains of the onboard flash ROM, and those profiles can also be exported or imported from a USB flash drive.

MSI’s Hardware Monitor menu is primarily a fan RPM mapping page, where users can select either PWM- or voltage-based control methods for each of the motherboard’s seven headers and assign custom curves or slopes to deal with various temperature readings.

MSI Board Explorer shows what’s connected to each slot, socket, or port simply by mousing to that location. We picked the port that our USB flash drive was plugged into and its description was accurate, though the cursor position wasn’t captured by MSI’s screenshot utility.

The MEG X570 Ace’s 4.20 GHz CPU clock would have put it over all X570 comers, if not for the spoiler data from our upcoming review of the ROG Strix X570-E Gaming. And what good would that win over other X570 models have done if it only managed to tie the older X470 board?

Memory overclocking is the MEG X570 Ace’s competition killer, where it accomplishes around 200 MHz higher data rate than the average of its competitor’s, even after we adjusted the voltage to keep the competition fair. Yet performance is the point of overlocking, so how much bandwidth did it get?

Relaxing secondary and tertiary timings are one trick to achieving a high memory overclock, but a performance deficit results. That’s what appears to be going on in the overclocked bandwidth chart, where even the X570 Taichi’s lowly DDR4-3733 four-DIMM limit outperformed the mighty X570 Ace’s DDR4-4000 bandwidth. These are also best-case scenarios since Sandra’s memory bandwidth drops when only two DIMMs are installed: The Taichi’s DDR4-4000 two-DIMM test produced only 38 GBps, and the Ace’s DDR4-4333 produced only 37 GBps, according to our test notes.