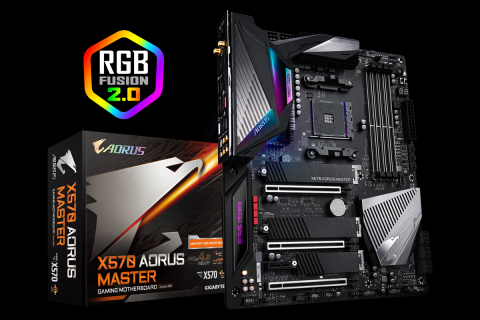 Ryzen 3000 Builders who want more slot and onboard storage availability will find it aplenty in the X570 Aorus Master. And the extra 2.5Gbps Ethernet controller is a nice extra, provided you can make use of it.

The price of AMD's X570-chipset motherboards may be off-putting to buyers accustomed to AMD’s low-cost story, and the lower cost of previous-generation X470 boards that, a lack of PCIe 4.0 support aside, are still viable options for AMD's new Ryzen 3000 processors. Gigabyte’s X570 Aorus Master competes in a high-end enthusiast segment that, thanks to the added cost of new technology, starts at around $300. Users who have adjusted their value expectations to current market conditions will find the $360 for this model reasonable, with our apologies to buyers in U.K. (where it’s £390).

Given what we’ve seen from other brands and what we’ve learned about the extra cost of producing PCIe 4.0 motherboards, we were surprised to see this high-end Gigabyte Aorus model selling for an almost-reasonable $360. (Although be fair, the company's true X570 flagship is the $699 X570 Aorus Xtreme). With the Master, we have a hefty (1.5kg/3.3-pound) piece of gear packed with everything from extra USB3 Gen2 ports to dual Ethernet (including 2.5 Gbps) and even a 2.4 Gb/s Wi-Fi controller, triple M.2 slots that are all active at the same time as triple PCIe “x16” slots, and even a quiet fan, to compete for a high-end market that effectively begins at $300.

It’s not that Gigabyte added any USB controllers to get those four I/O-panel ports, but that it added the resources to wire them out in a way that at least one competitor didn’t. Nor did the firm figure out how to magically cool the X570 PCH without a fast fan, but it instead chose a default RPM-to-temperature profile that kept the thing nearly silent throughout our review. And it’s not as though Gigabyte added any expensive PCIe 4.0 bridges, since two of those three x16 slots are CPU based and share sixteen pathways, while the third has only four lanes from the PCH. It’s just that, as with the I/O panel USB configuration, the company put in a little extra effort and / or expense to make the features baked into AMD's chipset more-accessible.

The 2.5 Gbps Ethernet port is a nice addition though, particularly for those who have a 2.5GbE/5GbE router. It’s a Realtek RTG8125AG, for those who need to check compatibility.

In addition to the Wi-Fi, dual Ethernet and quad USB3 Gen2 ports, the I/O panel is filled out with two USB3 Gen1 and four USB 2.0 ports, an optical S/PDIF and five analog audio jacks, and a pair of buttons for updating firmware and clearing its settings. The audio is fed from an ALC1220 codec through an ESS Sabre 9118 reference DAC for improved clarity, and the WiFi 6 adapter is supplied by Intel for improved compatibility.

While we generally recommend having a pair of USB 2.0 ports on the I/O panel to interface a keyboard and mouse without eating heavily into chipset I/O resources, we’ve no clue what you'd do with the other two here. These could appeal to users who treat their gaming PC as a general-purpose machine with a printer and scanner, perhaps. But we'd still like to see more faster USB ports here.

Gigabyte wants buyers to know that its power is fed through fourteen chokes by 50A Infineon IR3556 MOSFETs from a 16-channel Infineon XDPE132G5C controller in a 12 (core) +2 (SOC) configuration. Those MOSFETs are cooled by a traditional stacked-fin heat pipe arrangement that’s been fitted with a plastic shroud to give it a more-modern appearance.

A row of voltage detection points is found between a pair of CPU fan headers and a pair of RGB/ARGB headers in the upper-right corner. Beneath those are power and reset buttons, a switch to disable dual BIOS mode, a selector switch for the two firmware ROM ICs, and a two-digit status code display.

There’s still no such thing as a free lunch, and the cost of a four-lane bottom PCIe 4.0 slot and a pair of PCH-based M.2 slots that don’t share resources is paid by two of the SATA ports being disabled when the lower M.2 slot is used. That still leaves four SATA ports active on the front edge, above which is the front-panel USB3 Gen2 header. Below these, a front-panel audio, ARGB, RGB, TPM, two dual-port USB 2.0, a fan, two USB3 Gen1, Intel-style front-panel LED/button, a PC Speaker and a 3-pin power LED header fill the bottom edge.

Much of the X570 Aorus Master’s weight comes from a steel panel that covers its back. This is perfect for testing the board without a case, but won’t do much (except add weight) to a finished build.