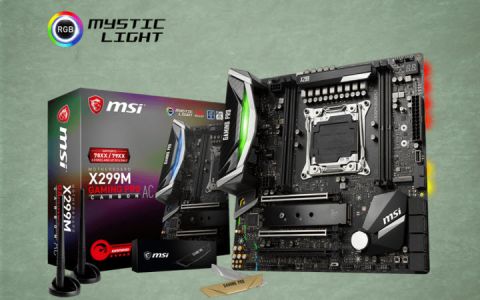 This MicroATX board could be the ideal choice for gamers who want two graphics cards and don’t mind purchasing an HB-SLI bridge separately (if needed). Prosumers will like its ability to support one graphics card, PCIe x16, and PCIe x8 storage simultaneously.

Buyers trying to decide between ATX and Mini-ITX have our complete sympathy, as the larger form factor is beyond the needs of most enthusiasts. Hardcore gamers typically run one or two ultra-high-end graphics cards, and even power users typically have only four DIMMs, a single high-end graphics card, and no more than two other high-bandwidth devices. Going ATX means buying all the huge pieces that support it, which seems like a terrible waste of space to users who only wanted a couple more DIMM slots and a slightly larger CPU voltage regulator.

Conceptualized to support the low-energy processors of set-top boxes, digital signage, and office terminals, Mini-ITX was never intended to have those things.  AMD tried to address the conceptual flaws of the Mini-ITX “godbox” in its 9.6”-deep DTX initiative, whereupon experienced builders mostly asked “why” and didn’t stick around to hear the answer.

Yet another compact form factor that applies all the fixes to satisfy most enthusiasts has been with us all along:

Within the X299M Gaming Pro Carbon lies the capability for gamers to install two full-size graphics cards in full PCIe 3.0 x16 mode. Power users can just as easily stuff a workstation card in one x16 slot, a 4x4 M.2 storage adapter in the other x16 slot, and the x8 card of their choice in a third slot. The X299M Gaming Pro Carbon AC offers most of what we liked about its full-ATX sibling, but in a smaller MicroATX package.

We did say that the X299M Gaming Pro Carbon AC supports most of that features of its larger sibling, but a few key things are missing besides the two lower expansion slots. First, the board doesn’t support 16-lane (Kaby Lake-X) processors. (Then again, neither did most of us.) The U.2 connector is also missing, though users who need to move their NVMe storage off the board are free to use an M.2 slot adapter.

The MicroATX version also has one fewer USB port on the I/O panel than the full-size X299 Gaming Pro Carbon AC, yet the smaller board gains a second network port, along with the associated controller (Intel’s i211AT). Both use the same PCIe 3.0 x2-based ASM3142 to feed Type-C and Type-A USB 3.1 Gen2 ports, both have the same 867Mb/s Intel 8265 Wi-Fi/Bluetooth module, and both provide CLR_CMOS and USB BIOS Flasback buttons on the I/O panel. That last feature allows users to flash firmware from a USB flash drive using an onboard ASIC, regardless of whether a compatible processor and RAM have been installed.

The X299M Gaming Pro Carbon AC keeps all eight SATA ports, donating only one to each of the M.2 slots when SATA-based drivers are installed there. Yet in spite of each M.2 slot’s PCIe 3.0 x4 NVMe capability, the MicroATX board faces the same M.2 bandwidth-sharing limitation of the ATX version, due to the four-lane DMI of Intel’s X299 PCH. The quest for ultimate drive performance points to the 16 lanes of the second slot and the eight lanes of the third slot, since certain interface adapter cards can break those out to four-lane M.2 drives. Half of those lanes are disabled when using a 28-lane (Core i7-78xxX) processor, but x8/x4 without DMI restrictions is still a great bit better than what the chipset offers.

As far as we can tell, upper M.2 slot placement is the primary reason that MSI put four DIMMs on the X299M Gaming Pro Carbon AC, unlike its eight-DIMM big brother. Yet putting it there also limited space around the USB 3.1 Gen2 front-panel connector, so its dedicated ASM3142 controller was moved to the back of the board. The MicroATX board also loses the larger board’s second USB 3.0 header, though it keeps both USB 2.0 connections.

Software RAID from the CPU’s PCIe controller requires an add-in module, and the necessary VROC module header is located in the front lower corner, right between the USB 2.0 headers and the last pair of SATA ports. Power and Reset buttons are located above it. To the left of (i.e., behind) the USB 2.0 headers you'll find the front-panel switch/LED group, a dual-ROM BIOS selector switch, a TPM header, a button to enable “Demo Mode” for the onboard RGB controller, a power input for demonstrating LED modes in an uninstalled board, two (of the board’s five) fan headers, an RGB LED output, and an HD Audio front-panel header.

The X299M Gaming Pro Carbon AC does not include a high-bandwidth SLI bridge. The flexible bridge makes sense from the standpoint of enabling users to configure SLI using either the second or third slot, but leaving the low-cost OEM part out of the package when aftermarket pieces are quite pricey seems stingy. We still get a very nice pair of magnetic-base antennas, four SATA cables, an 80cm RGB LED splitter cable, two alternative top plates for the decorative I/O connector cover, a case badge, and some stickers, along with the required documentation, a driver and application disc, and the I/O shield.