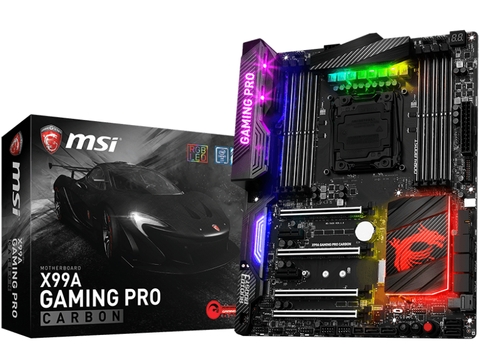 Surprisingly the GPC defaults to EZ Mode, which is something I wouldn't expect this board to have. You can change whether basic or advanced modes are the default when entering the UEFI, as well as which settings group to use as the landing page. Basic features include M-Flash for UEFI update over USB or network, OC Profile for saving and loading UEFI presets (six save slots on the board plus export to USB), Hardware Monitor for fan control and temperature readouts, five Favorites pages for grouping your most commonly used settings in a custom menu, and a Board Explorer for a graphical view of the motherboard and all the hardware connected to it. Like the Godlike before it, the Gaming Pro Carbon doesn't support FHD resolutions in UEFI (still only 1024x768).

Switching to Advanced mode brings up MSI's familiar six-tab layout (MSI calls the GPC's flavor Click BIOS 5). Just like the Godlike, the Gaming Pro Carbon has a simple/advanced mode toggle within the overclocking section. Simple mode hides controls for per core multiplier, EIST (Intel SpeedStep), Turbo Boost, a few direct RAM multipliers, and some of the secondary voltage controls. It's a nice touch for those who just want basic overclocking functionality but don't want option overload when configuring the board.

Chris and Igor already took a GPC for an overclocking spin in their 6950X review. While the new X99 test bed uses the same CPU model they used, it's not the exact same chip they had, so retesting is in order. My chip isn't quite the silicon winner theirs was. While Igor's chip was barely inside the safe zone at 1.38V and 4.3 GHz, mine was more than 105°C at those settings. Anything above 1.37V seemed too much to ask of it, despite having a larger cooler than Igor. The best my setup could reach was 4.25 GHz at 1.36V before I hit critical temperatures under our Prime95 AVX load. Regular consumers could employ the GPC's AVX offset, which lowers the CPU multiplier under AVX loads. This would allow higher CPU frequencies for normal workloads while still staying within safe operating temperatures for the occasional AVX work.

It's difficult to find the Gaming Pro Carbon's BCLK limits, since it manages the CPU strap ratios behind the scenes. The CPU and cache multipliers are automatically lowered with every 4 MHz increase to the BCLK, but you can't explicitly tell the board you want the CPU to run at 125 MHz or 167 MHz straps. The Command Center app in Windows warns you against using BCLK speeds above 103 MHz. This would be understandable on a board aimed for the low-budget market, but a model costing more than $300 should have explicit strap control. I found 102.2 MHz to be stable, but couldn't even boot the GPC at 102.25 MHz. 127.9 MHz was the highest I could reach while still being positive I was in the 125 MHz strap range.

Without voltage check points on the board I'm limited to CPU-Z and HWMon to check actual CPU voltage (which both report the exact same voltage as the UEFI for this board). Overall CPU voltage settings and controls on the GPC are top-notch and roughly equal to what you'd see even on a high-end Asus board.

RAM tuning allows full primary, secondary, and tertiary timing configuration, and RAM voltage is divided by bank. RAM voltage at the DIMM measures 10 mV higher than the board setting indicates. I was only able to reach DDR4-3223 on this board using the default XMP timings. That seems disappointing at first glance, but the stock XMP for this kit is already a tight DDR4-3200 CAS 14. Remember, when motherboards advertise supported RAM speeds like DDR4-4133, that's typically only when running a single low-density module.