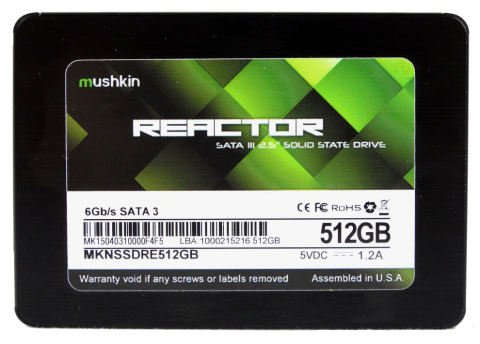 If you just want to get entry level SSD performance and don't want to spend a lot of money, the Reactor 512GB is a good way to get flash in your system.

Mushkin originally released its Reactor at a single capacity point: 1TB. That model is currently our Budget Buy leader. It's an affordable, well-balanced SSD for anyone looking for acceptable performance at a low price.

Like the 1TB Reactor, Mushkin manages to position its newer 512GB model as the lowest-priced SSD in its capacity class on Newegg and Amazon. Nearly every aspect of the Reactor was designed to cut costs. The company even introduced an edge connector able to increase rigidity while shaving 10 to 12 cents from the bill of materials.

The drive uses Silicon Motion's proven SM2246EN controller paired with Micron's low-cost L95B 16nm flash. Mushkin was one of the first companies to utilize the SM2246EN, and we've since seen SanDisk, Crucial and a number of other vendors integrate it into their own budget-oriented products. The processor uses only four channels to the flash, so it's a low-cost part. But Silicon Motion squeezes a lot of performance out of the design. At the same time, it doesn't use much power.

Silicon Motion provides firmware as part of its solution, so companies working with the SM2246EN don't incur a lot of R&D resource drain. After the initial tooling and validation, they can take products to market quickly.

Mushkin now packages flash purchased in wafer form. This allows the company to take in several grades of NAND and use the best dies for solid-state drives. The lower-grade stuff goes into thumb drives and other flash-based products. But the Reactor uses Micron L95B 16nm NAND, which we've found to be faster than Toshiba's 15nm MLC and TLC flash. Micron has been selling L95B to third-party companies for around a year now. Yields are up, so it's plentiful and cheap.

Two other cost-cutting measures are used to make the Reactor more affordable. First, it ships in a blister pack without any accessories. We don't mind this since SSDs are robust and difficult to damage. Second is that previously-mentioned edge connector, designed by parent company Avant Technology.