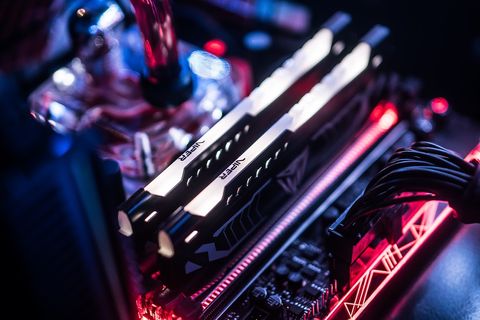 The Viper LED DDR4-3600 has the best performance of any 16GB kit we’ve tested that uses single-rank DIMMs. It becomes our 16GB choice as dual-rank 8GB DIMMs exit the market.

Patriot Memory’s Viper LED might not play to the RGB crowd, but its choice of red or white diffuser tops over monochromatic LEDs can still add flair to your system. More important, it’s a Viper product, designed for performance. The appearance may be good, but it’s still a secondary concern.

The firm drummed up a little excitement by sending us its top-model PVLW416G360C6K. That model number breaks down to mean Patriot Viper LED White, DDR4, 16GB, 3600, CAS 16Kit. It includes two 8GB DIMMs, two case stickers, and well-wishes for your overclocking endeavors.

All Patriot DRAM is covered by its lifetime replacement limited warranty.

It would be fair to compare the Viper LED DDR4-3600 of today’s review to other kits in the enthusiast range, from DDR4-3200 to DDR4-3866. But we’re throwing in a set of DDR4-3000 anyway, just to be fair to all the companies that have already lost to that kit. The difference is its dual-rank organization (i.e., both sides filled), which allows two modules to satisfy Intel’s memory-controller preference for four ranks. Dual-rank 8GB modules are disappearing from the market as the 4Gb ICs used to fill them are replaced with 8Gb ICs, and soon the only options to reach four ranks will be to use four 8GB or two 16GB modules.

We’re expanding outward from our Corsair DDR4-4600 review by switching to a board that supports four DIMMs. MSI’s Z370 Godlike Gaming doesn’t have any memory-overclocking advantages of the smaller board used in that review, but it has similar performance scaling and can push several of our kits past DDR4-4000. We’re also retaining the hardware from its review, including its GeForce GTX 1080 card and Toshiba/OCZ NVMe SSD.