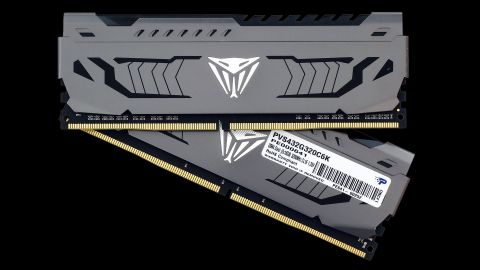 For those in either camp, but the former in particular, Patriot Patriot’s 32GB Viper Steel 3200 kit slams the competition on price, undercutting its closest rival in our analysis by nearly 18%. And that’s without any performance penalties, beyond those of having the same mid-market timings as its competitors.

Having recently taken home our Editor’s Choice award for its Viper Steel DDR4-4400, Patriot decided to take a run for yet another crown as the best value in a 2x16GB kit. Submitting a late-stage entry into our recent 32GB dual-stick shootout may have given the company time to flush expensive 2018 stock out of select seller’s inventory and restock at lower 2019 prices.

Patriot’s competitors might call this a dirty trick, but the rules of fair play do not apply in love and war. We rechecked competing modules to make sure competing prices of earlier kits hadn’t fallen as well prices hadn’t dropped since its reviews, but at $154 /£166.79, this kit is easily undercuts similar models from other memory sellers.

Like the Viper Steel that went before it, the word “steel” is simply Patriot’s branding for low-cost reliability in these aluminum-clad modules, though the darker finish is a bit more iron-like here. Buyers of the PVS432G320C6K kit get two sixteen-chip dual-rank DIMMs, with 8GB on each of the four sides, which have been overclocked from the IC manufacturer’s DDR4-2133 C16 rating to DDR4-3200 C16 via Intel’s Extreme Memory Profiles (XMP) technology.

XMP is nothing more than extended information within the memory’s configuration table, which is stored on a tiny ROM along with its standard settings. Among XMP’s added information is the voltage needed to overclock the memory with stability, which in this case is 1.35V.

Enabling XMP requires that the motherboard be XMP compatible (including XMP-compatibility routines in many AMD motherboard firmware), and enabling a DDR4-3200 XMP requires that both the board and the processor are unlocked for higher-than-standard settings. FYI, the highest standard for Intel’s H370 and B350 is only DDR4-2666, and the only fallback settings on these modules is DDR4-2133. So don’t buy a speedy kit like this if your board and CPU don’t support it.

Latency is measured in clock cycles, which happen in less time as frequency increases. Our standard for performance memory latency is one cycle for every 200 MHz of data rate, so that anything quicker can legitimately be called “low latency.” The Viper Steel DDR4-3200 C16’s settings are right in the middle, its good CAS 16 being slightly hampered by 18-cycle tRCD (RAS to CAS delay) and tRP (Row Precharge delay).

While the timings of this Viper Steel kit are rather middle-of-the-road, it’s competing here against two other kits that vie for similar value-minded customers. The HyperX Predator RGB kit costs a bit more, but the premium isn’t great enough for its buyers to step up to a significantly faster non-RGB kit.

The Viper Steel DDR4-3200’s overclocking ability falls between that of the competing G.Skill and HyperX kits, though its closer to the more-expensive Predator RGB.

None of these low-cost kits reached DDR4-4000, nor were they expected to on this Core i9-9900K. The Viper Steel surprised us by requiring extra tRCD/tRP to stabilize its CAS 13 setting at DDR4-2933, and the Ripjaws V had already surprised us in its review with the requirement of extra tRAS (35 cycles) at the same DDR4-2933 data rate. Overall, the Viper Steel appears to fall between the Ripjaws V and Predator RGB’s timings, and that sets us up for some interesting benchmarks.

Many users simply install their memory and forget to enable XMP, but even the neophytes here us won’t make that mistake--at least we hope. Sandra indicates that simply enabling XMP leaves quite a bit of performance on the table however, as our best DDR4-3466 settings shredded rated DDR4-3200 settings on all three kits.

The Viper Steel DDR4-3200 beats competitors where it counts, our F1 2015 and 7-Zip tests, even though its XMP margin of victory was rather small. Another surprise comes from our normalization benchmarks, Metro Last Light Redux and Blender, where its minor wins are a rarity.

Even though the Patriot Viper Steel’s performance victories are less than 1% overall, its low price puts it well ahead of even the least-expensive competitor in our basic performance-to-price comparison.  Value seekers within the performance PC market have just found their new champion. Of course, that’s assuming pricing stays fixed, or at least at fixed between competing kits, which is never a certainty. So check the price of all competing kits before buying. But as it stands today, Patriot’s Viper Steel 32GB DDR4-3200 kit is unbeatable for the price.