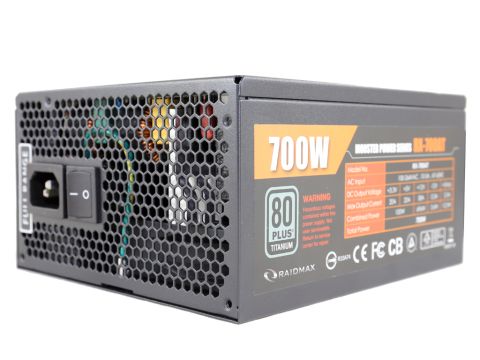 Raidmax's RX-700AT is a highly efficient PSU, however it suffers from a low hold-up time and its MSRP puts it in a high competition zone. With a lower price it would be a much more appealing product. Finally, the warranty has been extended to five years (from two) and this shows that Raidmax is willing to follow the competition's example in this area.

Raidmax chose a strange name for its new PSU. When you hear the word "monster," you either expect a bad external design or limitless capacity. But neither assumption holds true. Nevertheless, Radmax's Monster RX-700AT utilizes Andyson's new Titanium-rated platform that delivers excellent performance and ultra-high efficiency. In fact, as far as we know, Raidmax is the first company using this platform, so we're curious to see how it fares compared to the Andyson N700. The truth is that Andyson isn't one of the more active PSU manufacturers, and with its new 700W Titanium and 1200W Platinum designs, the company has the chance to gain popularity among partners looking for differentiated products.

For the most part, Raidmax focuses on the mainstream segment; its presence in the high-end space is limited. Most of its PSUs are made by Andyson. The only exception is the Vampire Power family (there's another strange name) manufactured by HEC/Compucase. The RX-700AT we're testing today shares the same platform with Andyson's Titanium N700. It achieves Titanium efficiency without a bridge-less design, which is mostly used in higher efficiency Titanium units. In order to restrict energy losses, this PSU employs a semi-modular design with more fixed cables. Removable cables incur increased impedance compared to native ones, leading to voltage drops. In short, energy is lost on modular sockets. This affects efficiency, and when you're gunning for a Titanium rating without a cutting-edge design, you have to minimize loss wherever you can.

Significant amounts of energy are lost on a PSU's bridge rectifiers, since they consist of diodes subject to voltage drops. Thus, all high-capacity Titanium-rated PSU designs use FETs instead of bridge rectifiers. In a FET, the lower the Rds (on) parameter (representing the resistance between source and drain), the lower the energy losses, especially under high currents. However, bridge-less designs require a more sophisticated APFC converter, more FETS and more boost diodes. All of that increases costs compared to conventional bridge rectifiers. Andyson's decision to go with a less exotic platform makes more sense in this context.

Besides Titanium efficiency and semi-modular cabling, the RX-700AT's other notable characteristics include a double ball-bearing fan and compatibility with Intel's C6 and C7 states. Unfortunately, the maximum operating temperature at which Raidmax says the PSU can deliver its full power continuously is 40 °C, whereas the ATX spec recommends at least 50 °C. In addition, over-temperature protection is missing from the feature set. That shouldn't be the case on a PSU with a 40 °C rating. Lastly, Andyson doesn't arm this unit with the semi-passive mode we'd expect to see given its Titanium-class efficiency.

The RX-700AT's dimensions are a little larger than normal, and we don't care at all for the short two-year warranty. Selling for almost $150, that sort of coverage won't get the RX-700AT anywhere near its competition. We can't help but wonder why Raidmax doesn't guarantee the unit for at least five years since that's what Andyson gives you with its similar N700 units. We'll look more closely at this power supply's build quality for hints as to why the warranty is so short.

The minor rails only offer 100W maximum combined power, which should still cover any modern system. On the other hand, one +12V rail delivers up to 58A. That'll support powerful gaming machines. Finally, the 5VSB rail is fairly typical, though we'd like to see it rated for at least 3A since this is still a high-end PSU.

There are too many native cables for our tastes. We know this helps Raidmax hit its Titanium efficiency rating, but we'd rather see Andyson's engineers fine-tune the platform and cut some of the fixed cables. Another major disadvantage is the single EPS connector. This is a high-end PSU and it should be compatible with high-end motherboards that need more than one EPS connection (or at least one EPS connector and an ATX12V one).

The rest of the connectors are ample to deliver this PSU's power effortlessly. There is also an FDD adapter that gives you a four-pin Molex connector in parallel with the Berg connector. The RX-700AT's cable length is adequate, and the same goes for the distance between connectors.

Next Page Packaging, Contents, Exterior And Cabling
43 Comments Comment from the forums
Be In the Know