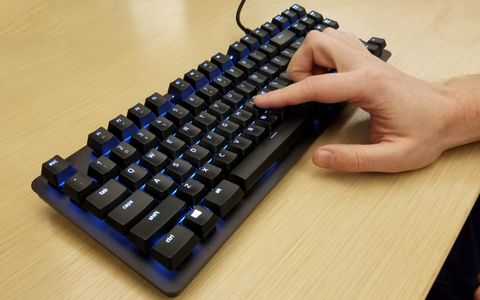 Light enough to carry in your bag and snappy enough for a great typing experience, the BlackWidow Lite is a great choice for business people on the go.

The rubber-dome-based keyboards that come standard with most desktops are a bad, mushy joke. Even if tapping your laptop's keyboard doesn't feel like you're pushing on a rock, nothing beats the feel of pressing down a deep, responsive switch. If you care at all about typing comfort, you need to get a keyboard with mechanical switches. But most of the top mechanical keyboards are made for gamers, so they look too blingy to use in front of your old-school boss.

Enter the Razer BlackWidow Lite. This $89 (£99) tenkeyless keyboard has office-formal looks and uses the Razer's orange key switches, which are meant to be relatively quiet while still offering a strong tactile feel. Though the BlackWidow Lite doesn't have any impressive bells or whistles, this workman-like keyboard packs a good typing experience into a really light and portable form factor. Frequent business travelers will find it particularly compelling.

The BlackWidow Lite's understated looks will fit in fine at even the most conservative law firm or investment bank. Apart from having the word "Razer" subtly embossed above the arrow keys, there's no obvious sign that this comes from a gaming company. Razer's snake logo is conspicuously absent.

Because it's a tenkeyless keyboard, the BlackWidow Lite doesn't have a dedicated numeric keypad. That makes the device very space-efficient but less-than-ideal for hardcore number crunchers.

Rather than having a built-in cable like so many other keyboards, the BlackWidow Lite comes with a detachable, braided microUSB to USB Type-A cable that has a built-in cable tie. So when you're on the go, you can easily wrap it up and take it with you.

The bottom of the keyboard features a pair of flip out feet that raise the top of it up about 0.3 inches (7.6 mm). While many typists will be fine with this, I would have preferred more elevation and a sharper angle with the feet flipped out. The Razer BlackWidow Ultimate that I have been using at work recently has a much sharper angle. The feet are also a bit flimsy as one fell off in my bag and I had to re-attach it.

The BlackWidow Lite is powered by Razer's own orange switches, which are supposed to be quieter than the company's clicky green switches while still offering plenty of tactile feedback. In my testing, the keys felt really responsive, but they weren't particularly silent and, for the most part, that's a good thing. Instead of the click sound you get from keyboards with green or blue switches, the Razer oranges give a pleasant clack.

While some users want near silence from their keyboards, I love the clack. Audible feedback is an important part of the typing experience, and these orange switches deliver it. Razer also includes a package of little rubber o-rings you can put around the switches in an attempt to make them quieter. We attached an o-ring to a couple keys, and perhaps we attached them wrong, but the volume didn't go down. However, the pitch of the clack wasn't as pleasant. My unsolicited advice: just enjoy the default clack.

The key feel on the BlackWidow Lite is really strong and responsive. As someone who usually won't even touch a keyboard that doesn't have clicky switches, I was surprised at how much I liked typing on the orange switches. The keys are a deep 4 mm with a snappy 45 grams of required actuation force.

By comparison, the green switches on many of Razer's other keyboards, including the Black Widow Ultimate, require a stronger 50 grams. Both switches actuate around at 1.9 mm, leaving an extra 2.1 mm before you hit bottom, but the orange switches require only a little more force to get all the way down to the 4 mm bottom, while the green ones take as much as 120 grams before you bottom out.

Perhaps that's why I felt myself bottoming out more on the BlackWidow Lite than the Black Widow Ultimate, but my fingers were actually less strained after an aggressive typing session because I didn't have to use so much force. I achieved nearly identical typing rates of 87 and 88 words per minute with a 98-99 percent accuracy rate on Razer's own online test.

In the end, I think I still prefer the clicky green switches, but not by a wide margin. I typed on the BlackWidow Lite comfortably for a long time while writing this review. However, I found the relatively low elevation from the flip-out feet less comfortable than typing on a keyboard with a steeper angle.

The BlackWidow Lite keeps things simple on the feature front with few bells and whistles in the hardware, but some added functionality in the software. There are no extra keys for controlling media, but if you hold down the Fn key, you can use the function row to raise and lower the volume, and pause / play or forward / reverse a media file. The F11 and F12 keys control the backlight brightness, which is highly adjustable and can become more or less luminous the longer you tap them.

If you want to game with the BlackWidow Lite, you'll be pleased to know that it provides 10-key rollover with anti-ghosting technology. It also has 1,000 Hz polling, so it should sense your keystrokes instantly, even in fast-moving first-person shooter games.

Razer's compact keyboard prompts you to install the company's Synapse control panel software the first time you plug it into a new computer (unless Synapse is already installed). This auto-prompting is annoying, especially if you don't need any of Synapse's features.

With Synapse running, you can control the brightness level of the keys, setup keyboard macros or even change what character(s) appear when you hit a key. So, for example, if you want to have £ be available as a single keystroke, you could remap it to a less-used key on your keyboard.

The Razer BlackWidow Lite offers a great typing experience with a conservative design aesthetic, but its greatest strength is really its portability. If you need a mechanical keyboard that you can throw into your bag and carry with you, the BlackWidow Lite's svelte dimensions and light weight are really compelling. However, this is far from a perfect product.

For the same price or less than BlackWidow Lite's $89 (£99) MSRP, you can get more features. Razer's own BlackWidow Tournament Edition Chroma goes for the same price, but comes with RGB keys and clicky green switches. Sadly, it weighs more than twice as much (4.1 pounds / 1.85 kg) as the Lite. The same keyboard, without RGB, goes for a mere $59 in the U.S. or £57 in the UK.

The flimsy, short feet are also an annoying drawback. And, if you plan to keep the keyboard on your desk and never move it, you might prefer a device that has a full numeric keypad. However, if you want the best combination of productivity and portability around, the BlackWidow Lite should be near the top of your shopping list.